Apprenticeship initiatives from coast-to-coast attempt to fill the funnel

Canada’s shortage of skilled trades continues to be an issue in most provinces across the country, with new initiatives being created to engage, encourage and recruit a new generation.

A national online forum for apprentices
The Canadian Apprenticeship Forum (CAF) is offering apprentices the opportunity to be part of an on-going e-panel  from all provinces to bring forward their experiences and challenges. In this way, it is hoped that a ground-level understanding can be better formed about what works, what doesn’t, and what should be done to build up the skilled trade workforce. “When you join this panel you will be asked to complete an online survey a few times per year,” the CAF website explains. “By participating in these surveys you can make sure that your opinion is heard on key issues facing apprentices and journey persons (e.g., training, certification, and wages).” For more information CLICK HERE.

What is the Canadian Apprenticeship Forum?
According to its website, the Canadian Apprenticeship Forum ( CAF-FCA) was formed to act as a pan-Canadian voice for the apprenticeship community by offering strategies through research, discussion and collaboration. The CAF provides stakeholders with accurate, unbiased insights into apprenticeship challenges and barriers, and also connects stakeholders so that they may share information and promising practices, identify challenges and propose joint solutions. It promotes apprenticeship as a valuable form of post-secondary education to youth, parents and employers by offering online round-tables and trades conferences. 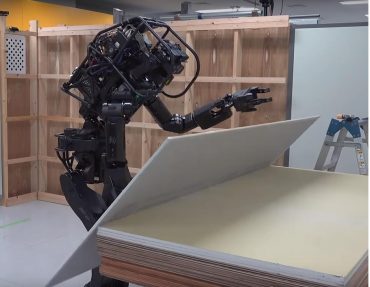 Slow but steady. No lunch breaks but not much conversation either. Robots are becoming a real possibility in Japan as the population rapidly ages

If all else fails, there’s always robots!
Are robot workers the answer? Watch this video of a robot drywall installer. Slow but steady. No apprenticeship required, no lunch breaks needed. Not much for conversation but doesn’t care what music is played on site either. Japan is experienced a rapidly aging population. Robots for large construction projects with repetitive tasks are being considered.

Individual trade industries are getting involved in apprenticeship recruitment
On a more realistic level, perhaps some results of CAF’s investigations are already showing up. The Ontario Electrical League (OEL) recently announced a program in conjunction with Support Youth Ontario to identify and train employers who might be new to apprenticeship training. According to federal Minister of Employment, Workforce Development and Labour Patty Hajdu, a high level of support is required to bring apprentices and employers together. The Minster estimates the cost of investment by an employer can be as high as $100,000 over a five-year apprenticeship. The federal government is providing $618,000 to the OEL for the organization’s new Consortia Pilot Project — Employer Engagement program to support first-time employer participants in apprenticeship training.

Initiatives aside Ontario’s skilled trade crisis continues to be the worst in Canada
Ontario has the highest apprenticeship ratio requirements of any province in Canada, thanks to the rules set and policed by the Ontario College of Trades (OCOT). This is only compounding the skilled trade shortage in the province. Areas outside of the Toronto’s GTA are the hardest hit by OCOT’s high ratio requirements, since many companies are smaller in size — skilled trade apprenticeship hopefuls often leave home for the bright lights. A number of creative attempts are being created in order to deal with the skilled trade migration experienced by smaller communities. 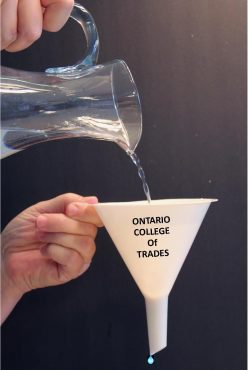 No matter how many hopeful apprentices fill the top of the funnel, OCOT rules and regulations are restricting the outflow to a trickle

Grey County has recently purchased a surplus school northwest of Toronto next to the local Georgian College campus in order to create a 45,000 square foot Regional Skills, Training, Trades and Innovation Community Hub led by the county and involving many community partners. Grey County Chief Administrative Officer Kim Wingrove told the Owen Sound Sun Times that regional employers are having difficulty filling some positions in the skilled trades. “The hope is that the hub will train the people locally to fill more of those positions,” she said. “Part of what happens is where you need to leave your community to go and get that additional training, maybe you don’t come back or you don’t come back for some while. It is our hope that we will be able to retain more people here in Grey County because they can get the training they need, and we can build some closer ties with existing businesses and manufacturers, that when these people are still in their programs, still getting their apprentice hours, they are building a relationship with a business that is already rooted here in Grey County.”

Grey County is not alone. The Muskoka Builders Association is investing $12,000 in an attempt to attract skilled trades to move and take up work in their area two hours north of Toronto. They hope the association’s seed money will be further supported by various levels of government in order to extend the three month pilot project. “The truth is we do have year-round work,” Josh Pearcey owner of builder Brian Hoar Inc., and an association board member told local media.

OCOT continues to choke off Ontario’s apprenticeship supply
The Ontario College of Trades (OCOT) manages sets and manages apprenticeship ratios in the province. Their restrictive ratios they have imposed have created a major bottleneck that, sadly, has yet to draw any action from the newly elected PC government under Premier Doug Ford. OCOT claims it is reviewing the apprenticeship ratio issue, but does not plan to announce their findings until spring 2019. This slow-motion review tends to put a damper on the innovative efforts being made in many regions across the province. While programs in other Canadian provinces will likely go some distance to improving the future skilled trades prospects their respective home building industries, most experts, employers and apprentices agree that the new Ontario government needs to deal directly with the severe roadblocks imposed by the Ontario College of Trades. Filling the apprenticeship funnel is fine, but not if only small drops pass through.

Canadian Contractor has been regularly reaching out to Merrilee Fullerton, Ontario Minister of Training, Universities and Colleges, for any announcements of much-needed action. To date, however, Fullerton has not yet agreed to speak to us directly and has had little to say overall about the issue.