Apprenticeship registrations on the rise

The number of new registrations for apprenticeship and trade certification programs increased in Canada in 2021, but still remain below pre-pandemic levels. 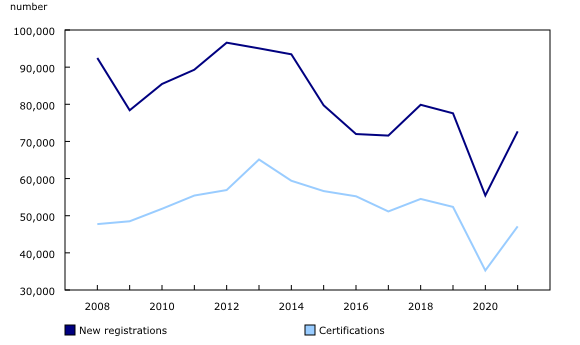 New registrations in apprenticeship programs increased by 31.1 per cent in 2021. Certifications in the trades were also up, rising 33.7 per cent. Yet both numbers remained below pre-pandemic levels, reports Statistics Canada. Job vacancies in the trades, transport, and equipment operators and related occupations also hit an all-time high in 2021, nearly doubling since 2019.

New registrations increased by nearly 38 per cent in Ontario, nearly 37 per cent in Alberta, and a little over 20 per cent in British Columbia last year. Growth in Ontario’s and B.C.’s construction industry helped increase in the number of certifications in the trades.

While overall numbers are still behind pre-pandemic figures, the number of women registered for training in many construction-related trades surpassed pre-pandemic levels in 2021. The number of females training to become exterior finishers increased by nearly 57 per cent; carpenters by nearly 30 per cent; and electricians by 27 per cent in 2021. These were the highest numbers of new registrations for women since 1991, when StatsCan began reporting on registered apprenticeship training programs.