Two big winners for 2017 had one thing in common

The annual BILD Renovation and Custom Home Awards represent recognition for excellence in the GTA’s (Greater Toronto Area) vibrant residential marketplace. Created by Building Industry and Land Development Association in 1999, the awards recognize renovation general contractors for professionalism, quality of work and industry leadership, as evaluated by a team of industry professionals.

Two companies in particular stood out among the winners this year, each taking away two awards, and reinforcing a business model that is taking hold among the country’s leading contractors — Design-Build.

Golden Bee Homes
BILD Renovator of the Year
Best Renovation $75,000 to $150,000
Jack Torossion, a third generation builder who worked his way up through his family’s construction business, formed Golden Bee in 2005. “We’re not a big company and we don’t overwhelm ourselves with too much work,” Torossian told Canadian Contractor. Golden Bee has found great success to this point by working with designers with whom they have developed a relationship. However, the company plans to move into larger offices soon and incorporate their own in-house design team. 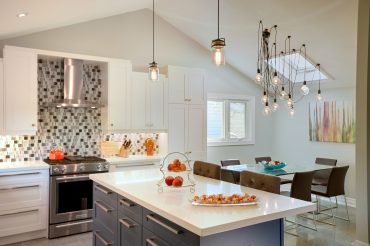 In addition to being named Renovator of the Year, Golden Bee Homes also won Best Renovation $75,000 to $150,000 for the modernization of a kitchen, dining room and living room, as well as two upstairs washrooms and an exterior deck. (Design credit goes to HSK Designs)

As company owner, Torossian’s prime function is to ensure the rotation of his two construction teams through projects smoothly. “We usually run three projects at a time per team. One should be at the beginning, another in the middle and the third at the finishing stage. That way, the crew rotates, so you can more easily manage the labour, the trades and sub trades so no one will be on top of each other.” With two teams, each with a project manager overseeing three jobs at their various stages, means Golden Bee can in fact handle six jobs simultaneously. “I don’t give the project manager a fourth job until he finishes the third.”

Winning two awards, included Renovator of the Year, has been a huge company morale boost and validation of Golden Bee’s business strategy. “I thank everyone on my team,” said Torossian. “This is a result of the hard work they’ve put in. I may have the dream and management skills, however they did the job, and they deserved this.”

Urbanscape/Urbanline Architecture
Best Renovation $150,000 to $300,000
Best Renovation $300,000 to $500,000
Ali Malek-Zadeh runs two parallel practises as part of his design-build strategy, Urbanscapes and Urbanline. It’s a 10-person operation established in 2004 that has evolved and grown.  “Our line of work has changed since we started. Our focus now is on modern homes and modern architecture,” Malek-Zadeh told Canadian Contractor.

Before/after: Urbanline/Urbanscape won the Best Renovation $150,000 to $300,000 award for the conversion of a dated house into a light-filled, contemporary home. It was one of two awards won by the company

Malek-Zadeh  explained his two banner approach. “Under Urbanline, we deal with the management of the project, and Urbanscape is the design arm. We are a design-build company.” While his 2017 award-winning projects were in more mature areas of central Toronto, Malek-Zadeh is spreading his design-build practice out to other areas of the city. “For the past few years we were focused on central Toronto because there was so much happening there. But now we are working on projects from Etobicoke to Scarborough, up to Richmond Hill. We’re working everywhere in the GTA”

All BILD award winners are members of the national RenoMark program, which connects homeowners with professional renovators who have agreed to abide by a renovation-specific Code of Conduct. Helen Batista, BILD’s vice-president of membership and RenoMark program manager explained the significance of the annual awards. “This year’s winners truly exemplify the quality and integrity that home owners can expect when working with professional renovators and custom builders.”