"Having taken over the position of president in 2009 with the mandate to revitalize its operations, Rolfe was not prepared to rest on past performance" 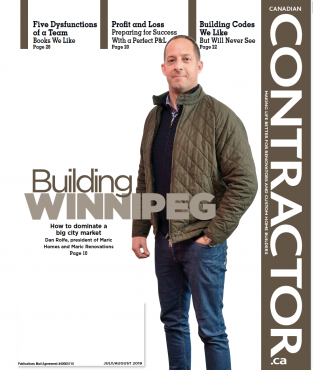 As one of four representatives from the prairie provinces, Rolfe was by any standard the most successful builder at the event. Maric Homes had been building custom homes in Winnipeg for over 45 years and had the kind of reputation for high quality and customer service that was the envy of the market. Rolfe could be proud of the legacy of his company and his contribution to the RenoFocus group.

But Rolfe was relatively new to the company too, and ambitious for more. Having taken over the position of president in 2009 with the mandate to revitalize its operations as the founders stepped back from day to day operations, he was not prepared to rest on past performance. What he saw and heard from the other builders at RenoFocus, almost all full-time renovators, was an opportunity that Maric had never seriously considered—to become the most sought-after renovation company in Winnipeg.

Maric has always done renovations, but they came over the transom, randomly, ad hoc, and were never seen as a core part of the business. “We had helped Maric Home customers that wanted a basement done or a kitchen remodeled and didn’t know who else to call,” says Rolfe. “It was more a customer service.”

At the same time, the market conditions for new homes in Winnipeg was making the decision to start a renovation division very attractive. The new home building market was (and is) very competitive and the margins razor thin. In an average year a top line of $10 million might still leave you with only a few thousand dollars of profit. Greenfields in Winnipeg were drying up and the city introduced an Impact Fee surcharge to the existing development fees that added about $10,000 in costs to an average-sized new home.

Fortunately, Maric was ideally positioned to take on the renovation market. Over the many years of its existence, it had built relationships with hundreds of satisfied customers who were now living in homes that needed upgrading. Who better than Maric to be their renovator of choice?

When a renovator peer group developed out of the RenoFocus event, Rolfe saw his opportunity to get the help he needed to launch Maric Homes Renovations. He joined the group (named NextLevel Renovators) and put together a budget for his new venture. He set his first-year top line goal at $1 million, modest by new homebuilder standards. He hired a General Manager to run the operation, began getting the word out to the Winnipeg market that Maric was in the renovation business and started selling.

It was a slow start. The GM didn’t work out and Rolfe was still getting the feel for how different selling renovations was from selling new homes. “I think if you’re going to say that you’re actually doing renovations, you need to look and act like a business and I think that what’s we weren’t really doing. We were just saying it falls under our skill set, but it wasn’t a legitimate business.” There was a new approach to the customer to consider, a different mindset to inculcate into the company and a different sales and marketing approach to develop.

Rolfe’s next general manager came from within Maric Homes. Steve Crampton had been working for Maric for five years and was eager for a new challenge. “He understands the dynamics of our family business, he knew exactly what his role would be almost before he filled it, and he was motivated. It was an important fit and I’m so happy to have him on the renovation side. He’s really taken ownership.” At the same time, Rolfe was getting used to the different pace needed in renovation sales. He was “slowing down to speed up,” allowing his relationships with his clients to develop during the design stage in a way that was different from new homes sales.

It might be the reaction of the competitors that surprised Rolfe the most. “We had competitors come over and welcome us to the business.” It seemed the decision of a company of Maric’s stature and reputation to enter into the renovation space lent legitimacy to that part of the industry. “We got a lot of feedback like that. And a lot of positive reaction from the homebuilders association.” At the same time, there was the competitive reaction you would expect. Says Rolfe, “It was like, holy shit, Maric Homes is coming in to our market! We better up our game.”

The sales adjustment was a learning curve for Rolfe. “We needed to understand what we can provide as a service first and react from that. It is a totally different conversation than we were having before. When we started this, we didn’t really know what our strengths were but now we are communicating it properly to our clients and it is helping them in the decision to close deals.”

Rolfe thinks the sustainable level for Maric Homes Renovations is somewhere in the $2 million revenue range, but now with the right person in the general manager’s chair and the right marketing in place, he says the sky’s the limit. “After the $2 million mark we’d like to see steady growth as we bring in new markets and see how the two divisions compliment one another. We want to be the true one-stop shop for homeowners.”

Splitting up
All of this is still happening from the same offices with the same designers, project coordinators, field staff and subtrades as the homebuilding operation. However, the difference between homebuilding and renovations is starting to have an impact. For instance, the trades were excited to learn that one of their best customers was entering into an expanded phase of business, but also realized they had to make adjustments. Rolfe says when they get a call from Maric now, the first question they ask is “New or reno?” and are assigning different staff depending on the answer.

They know the timelines are different, the interaction with the end user is very different and the demands being made of them is different. The personalty of their employees needs to match the demands of the project both technically and socially. Rolfe says some are even writing their own procedures for servicing renovations. Others have said they don’t want to work on the renovations at all. “There are a number of reasons why,” says Rolfe. “They say, ‘It’s too messy, or, ‘It’s too tight a timeline,’ or ‘I can’t come and go when I please.’ It takes someone that can really thrive and enjoy the renovation environment to do well.” There is a sense that where new homes are “tab A, slot B” type work, renovations present a complexity that takes more creativity, sensitivity and patience.

Within Maric, Rolfe says, there will always be a thread attaching the two sides of the company. So far, notwithstanding Crampton’s position, both the new homes and the renovations go through the same pipeline. Rolfe doesn’t see that changing too much in the near future. “It has to do with the fact that we are a family owned and operated company, and we’ll never get away from that.” Still, he envisions a time when staff will be dedicated to one side or the other. “Ultimately it’s inevitable. The renovation side with have its own people for every single thing.”

Future growth
So far, about half the growth of Maric Homes Renovations is coming from outside existing Maric Homes housing stock. Given that the Maric Homes inventory reaches into the thousands of homes, Rolfe thinks he is barely scratching the surface of the renovation market open to him. “It is virtually untapped at this point.”
Well tapped, on the other hand, is the enthusiasm and entrepreneurial spirit of Dan Rolfe for new ventures, new challenges and new visions. And there is perhaps the key to what will no doubt be the success of Maric Homes Renovations.