Canada’s housing supply crunch cries out for solutions. You can help!

The headlines scream the news coast-to-coast almost daily about the fast-rising cost of urban housing in Canada’s major centers. What started in the Vancouver area a few years has now hit Ontario hard. Prices in Toronto have risen 30 per cent in a year, and that pricing bubble now extends well beyond the GTA itself.

We know all this. It’s time to move beyond the finger-pointing at speculators, low interest rates, and buyer panic and instead ask, “What role do residential builders and contractors have to play in resolving the housing supply issue?” 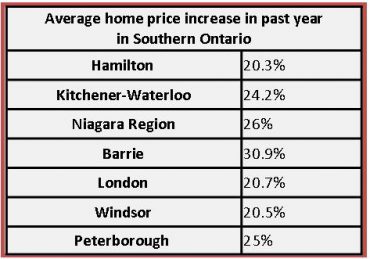 Canadian Contractor spoke last week with Bob de Wit, CEO of the Greater Vancouver Home Builders’ Association (GVHBA). De Witt referred to the recommendations of a 2017 study by Landcor Data Corporation of building approval processes in the Vancouver region that identifies Best Practices solutions and land use efficiency. Sky-high home prices are not new to Vancouver and other nearby municipalities. They’ve been dealing with it for some time. With the phenomenon now spreading across the country, particularly in Ontario, there is much to be learned from Vancouver’s experience. Many of the problems lie with a mis-match between supply and demand. 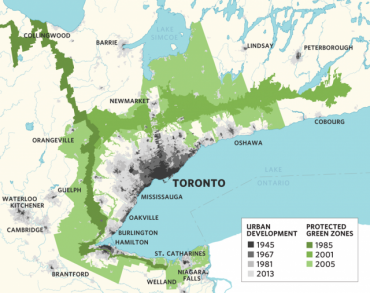 Increasing housing options through “gentle densification”
De Wit fully supports the many recommendations of the Landcor report, and in particular the concept of ‘gentle densification’ within existing neighbourhoods through Infill Housing. It’s certainly an issue that cuts to the heart of Ontario’s growing problem. Given the mandate handed down by the province to all municipalities tightening the rein on the instinct for sprawl, and the Greenbelt restriction around the GTA, efficient use of what land is available would seem critically important. Endless expansion into green fields may seem like an easy fix to the housing shortage in some non-GTA areas, however it places a heavy burden on those municipalities to expand expensive infrastructure to support such developments. 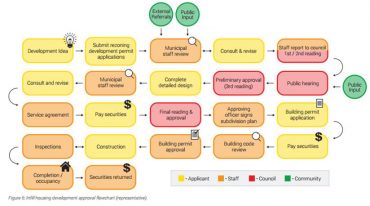 Streamlining the re-zoning approval process and moving it towards a pre-zoning model would reduce the complications that kill many projects before they begin. (chart: Landcor Data Corporation)

Green field development isn’t even an option in major cities, but ‘Infill Housing’ is. Instead of approving high rises or replacing older houses one for one, de Wit supports the approval, even pre-zoning, of duplexes, triplexes, quad plexes and laneway homes. De Witt suggests Infill Housing is “the kind of gentle densification that allows people to have ground level housing at a more reasonable price. I think families would prefer to raise a family with two kids in something ground-oriented rather than a 650 square foot apartment in a high rise.”

“It’s low-hanging fruit for politicians if they pre-zone neighbourhoods to allow this.” Bob De Wit

The Landcor report outlines how gentle densification through Infill Housing can be a win-win-win for builders, home buyers and politicians alike. “Infill Housing options for single family dwellings help to address housing supply and affordability issues …. and support complete liveable communities, while maintaining and enhancing the integrity of existing neighbourhoods. Municipalities who embrace gentle densification versus ‘keeping the status quo’ will benefit from an increase in their economic base from which local schools, businesses, amenities and services can thrive.” 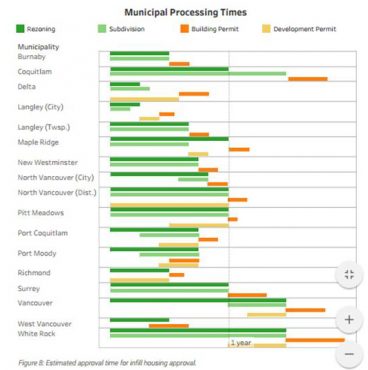 Variations in total approval time for residential building applications is substantial and varies from area to area. Moving to unified Best Practices would help cut this down. (chart: Landcor Data Corporation)

However, procedural delays for getting these types of projects approved remains far too long and drawn out, another focus of the Landcor report. While there is no easy solution given that each municipality has its own internal issues and some larger cities have their own building codes, the report outlines a number of Best Practices that, if adopted, would help resolve the urban housing supply shortage.

Clear the clogs!
Clearing the clogs from application processes in a unified manner is a monumental task, but a necessary one if the housing supply shortage is to be successfully addressed.  As the Landcor study revealed, the time delays and multiple layers of bureaucracy required for final approvals on a gentle densification re-zoning application is preventing a number of good projects from ever going forward. Safeguards are one thing, but as the McKinsey Global Institute report on Productivity in Construction pointed out, Canada falls well down the world ranking in terms of application approval efficiency. Our municipalities need to do better.

Other drain-clearing suggestions in the Landcor report describe other Best Practices in addition to pre-zoning. These include:

A daunting list to say the least! Nevertheless, de Wit challenges his GVHBA members and others across the country. “Get involved with your local building association. Have conversations with municipal building officials. Be a champion for addressing these policies and procedures.”  It’s also a great opportunity for savvy builders willing to approach their municipalities and start the process for change. There’s a good business opportunity at the end of the rainbow.