Muskoka, Ontario woodworker Joe Nefsky spent 24 hours on the road to be a part of it

Festool, the German manufacturer of high-end power tools, has been compared to fellow Stuttgart-area firm Porsche in the quality of its products and the devotion of its user base. The company has a core of users – especially in fine woodworking and carpentry – that are almost religiously devoted to the company’s tools. Nowhere was this more evident than this past weekend at Festool Connect, a “customer appreciation day” at the company’s head office and distribution centre in Lebanon, Indiana, near Indianapolis.

The event looks like it has the potential to grow into a sort of Woodstock of Fine Woodworking in the years ahead. This year’s Festool Connect attracted tradespeople from all over the Midwest and, yes, from Ontario. Given that it’s about a 12-hour drive to Lebanon from many parts of Southern Ontario, the presence of so many Canadians at the event didn’t go unnoticed. 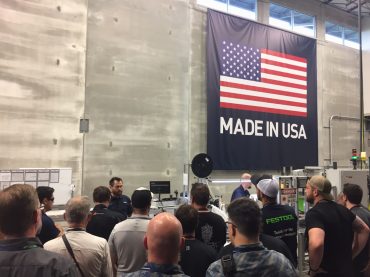 The plant tour showed Festool’s first “Made In USA” operations: the finishing operations on the rail for the company’s famous Track Saw. While using limited personnel currently, Festool wants to ramp up its North American production over time, including the development of new products for contractors on this side of the Atlantic.

Festool manufacturers the bulk of its worldwide products at a cluster of factories in Germany. However, it maintains a complete inventory of all parts here in Indiana so that products can be repaired for the U.S. and Canadian markets on very fast timelines. The company’s commitment is to keep all parts in stock for a minimum of 10 years after a product is manufactured.

The community of Festool users is (like those of other manufacturers) connected by user communities online, and especially via Instagram, where carpentry tool reviews have sprouted like the corn that still completely surrounds the Festool facility here. Many of the attendees this weekend said that they had learned about and made the decision to attend Festool Connect via social media. 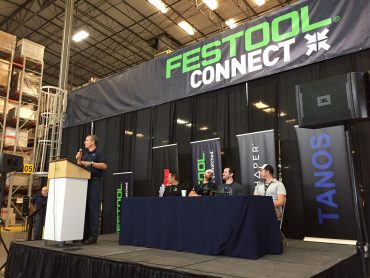 Canadians are – for unknown reasons – at the very centre of those Festool owner conversations online. And they were well represented on the “Social Media and Modern Craftsmen” panel discussion during the show. Instagram carpentry celebrities “Kiefer Limeback (@toolaholic) from Whitby, ON and Jeff Mack (@jeffmackdesigns) from Toronto communicate almost daily to a staggering 360,000 Instagram followers. No wonder Festool flew them down to this event to be speakers on the art of social media.

Not all of the many Canadian contractors in attendance arrived on airplanes. Joe Nefsky, a woodworker from Severn Bridge, Ontario – part of the Muskoka area – drove 12 hours down on Friday and 12 hours back home on Sunday – simply for the opportunity to see several hours of Festool product demonstrations and network with his online friends (plus to attend an after-hours “meet-up” of fine woodworking tool users in downtown Indianapolis). 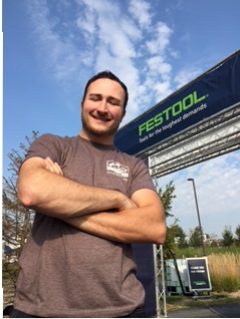 Nefsky is only 24, and has been running his business (Out of the Woods Custom Woodworking) for only two years. We asked him why he was prepared to spend 24 hours in his car to attend a power tool manufacturer’s event almost 600 miles away. “Why I’m here is to expand my knowledge on the tools,” Nefsky said. “I know the quality of Festool. I rely on them for the quality of my every day work.”

Nefksy is one of a new breed of tradesmen. He’s essentially self-educated online. Graduating with a marketing degree from University of Guelph/Humber College in 2015, Nefsky had fallen in love with fine woodworking from personal projects and considered enrolling in the one-year cabinet making course at Georgian College, Barrie. “But it was about $2,300 per semester, for three straight semesters,” he told Canadian Contractor. “I looked at the total cost and I thought, well, that’s a SawStop (high-end table saw firm that Festool acquired recently). So I bought the SawStop.”

After that, Nefsky has mixed learning by talking to other woodworkers on social media, trial and error, Lee Valley Tools courses and the type of interaction from tool demonstrators and woodworkers at the Festool Connect event. He is not in the Kiefer Limeback or Jeff Mack range when it comes to Instagram followers, but he has built a healthy 20,600 followers.