Should Canadian workers use safety belts (as opposed to harnesses) while re-shingling homes?

Safety belts cannot be used in Australia or New Zealand as a recognized fall restriction device because they do not distribute body forces after a slip, trip or fall. A full body harness achieves better results. However, in Ontario and other parts of the country, belts are still allowed under the Occupational Health & Safety Act, but only as part of a  fall restraint system, defined under regulation 26.1 (2)as “A travel system that meets requirements of section 26.4 26.4 (1).” That section in turn says: ‘A travel restraint system shall consist of a full body harness with adequate attachment point or safety belt. O. Reg. 145/00, s. 14.”

What this means is that when wearing a belt only, workers should not be in a position that risks falling over an open edge. The obvious dangers of falling off a roof edge wearing a belt instead of a full harness include the worker’s back snapping along with greater internal i 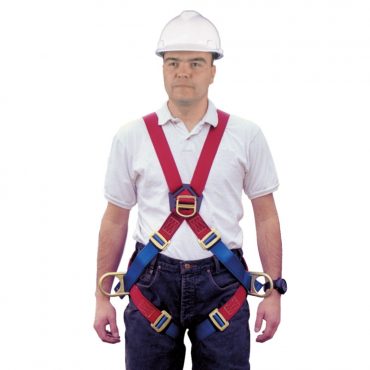 njuries, both of which lessen survival chances.

I recently spotted a worker on a roof edge of a residential re-shingling job wearing a belt only. When I first saw him, he was sitting balanced at the furthest corner of the front roof-line, meaning he was at the greatest distance from his anchor point, some 25 feet away on the roof peak.

The problem was, had he taken a slip sideways, his restrains system would have failed him; he would suddenly be in a fall arrest situation, but without wearing  fall arrest equipment.

Fall arrest systems consist of a full body harness, connected to a lanyard (with a shock absorber), which is then connected via a ‘D’-ring located between his shoulder blades on the harness.

In my example, regardless of the system he was wearing, the worker faced a swing fall hazard, possibly resulting in him crashing into walls, fencing, trees, hitting the ground (bottoming out), and more. He definitely needed to be tied-in with additional anchor points along the outside edge to reduce his swing after a fall.

The supervisor openly showed me crew’s newly purchased safety belts. All were CSA approved and recommended by the trainer at their recently completed mandatory Working at Heights (WAH) training course. Although belts are remain legally wearable under the Act in many provinces, as a WAH trainer myself I personally don’t recommend anyone wearing them, especially while re-shingling residential homes.

Do you think safety belts should also be outlawed in Canada?