Tax fraud and consumer vulnerability are only two of the problems

[This article ranked No. 1 on our list of most commented on pieces from 2019.]

The underground, work-for-cash economy can be a challenge for legitimate contractors. Prospective clients may ask for cash discounts. Aggressive competitors in turn may offer them. It’s a problem that persists regardless of the business cycle. When times are busy, there’s a flurry of new entrants to the industry, each eager to outbid one another on projects. When times are slow, the work-for-cash economy takes root as a way to keep business rolling. The issues raised are many, including tax fraud, fair wages, and liability. 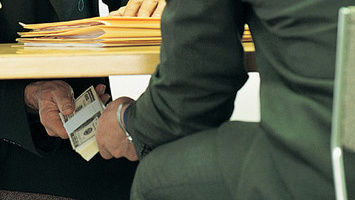 The cost of the underground economy is enormous
In a joint statement, the Carpenters’ District Council of Ontario (CDCO) and the United Brotherhood of Carpenters and Joiners of America (UBC) referenced a Prism Economics and Analysis report suggesting that between $1.8 and $3.1 billion is lost annually in Ontario alone through the tax fraud resulting from the underground economy. “When tax fraud takes place, it prevents the employees of contractors who partake in unfair practices from gaining eligibility for workers compensation, unemployment, and from contributing to personal retirement plans and social security,” the statement said. “This is also what leads to money being taken from public funds designated for items like healthcare and social services.”

Awareness events took place in 70 North American cities
A movement to deal with the problem has emerged in a united, continent-wide front. The CDCO and the UBC staged events coast to coast in both countries on April 15 to draw attention to what they call the “tax fraud and proliferation of the underground economy in the construction industry.”

“There were well over 70 cities involved,” Mike Yorke, President of the CDCO, told Canadian Contractor. “It started at 6am on the east coast of Canada in Newfoundland with banners, and just rolled across North America throughout the day.” Halifax, Toronto, Waterloo, and Edmonton were other Canadian locations where coordinated events took place. 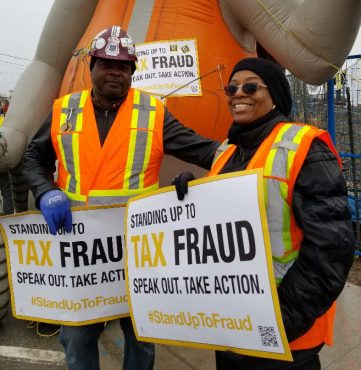 In Toronto, a four-stage approach
Yorke described the strategic events in Toronto that started at daybreak. “We were at a non-union job site, coincidentally a Canada Post project, at 6:30 in the morning, marching with banners,” he said. “We had determined over three or four weeks that there were a lot of workers there being paid under the table, straight cash. Then we did a press release at Toronto City Hall at 10am. In the afternoon we were out at the Scarborough Town Centre to talk to the public. After that, we met with the federal Minister of Finance. We did the full spectrum.”

The public dialogue was important because, as Yorke pointed out, it’s not just unpaid taxes that impact the government’s ability to pay for public services. “There is also a huge liability for the homeowner. If they do not use a legitimate contractor, there’s going to be a whole list of health and safety violations, and potential damages if someone is injured on the job. Homeowners have a huge responsibility that they may not be aware of. That’s why they need a legitimate contractor who can defend their interests.”

The contractor you want and the one you don’t
There’s a saying that summarizes the conundrum faced by homeowners; “The contractor you want is booked for the next six months. The contractor you don’t want can start tomorrow.” An example of this is played out in Season 8 of Shameless (available on Netflix). Twenty-eight year old Fiona has gone out on a financial limb to buy a small, run-down apartment building on the south side of Chicago. She’s a complete novice as far building management goes. The roof needs repair. She calls up a roof repair company — basically two guys in a pickup. They quote Fiona $750 to re-tar the roof and repair some flashing. She bids them down to $500 cash. However, they are not insured, not licensed, they don’t observe any safety protocols, and there’s nothing in writing — all Fiona has is a cellphone number. One of the two workers falls off the roof and breaks his leg. He sues Fiona for $6 million.

Aiming for a national policy
The ultimate goal for the Yorke and the CDCO is an actively enforced national Fair Wage Policy, something the City of Toronto has but Canada does not. “Part of our continuing dialogue with the Federal government is about implementing and establishing a Fair Wage Policy. We’ve used Toronto as an example to our Federal ministers.”