Call it America’s version of the ‘Gimli Glider.’ You remember: The Air Canada jet that ran out of fuel over Manitoba due to a litres-to-gallon conversion error?  Now the Centre for Disease Control and Prevention (CDC) in the USA has admitted it erred and severely underestimated the cancer risk posed by select types of Chinese laminate flooring sold by Lumber Liquidators in the United States and certain parts of Canada until early 2015. Why? A feet-to-metres math error. 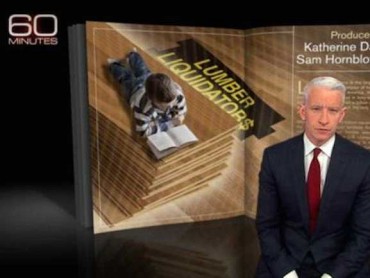 The original story broke a few years ago on the CBS Show 60 Minutes when customers went public with complaints about breathing problems and throat irritations after installing laminate flooring purchased at Lumber Liquidators. The story went viral from there (including extensive coverage in Canadian Contractor), sending the company’s stock price plummeting, shooting senior executives out the door, and spawning class action lawsuits in both countries.

What’s the problem?
Laminate flooring is a wholly fabricated product with little or no solid wood at all; it is nothing more than a plastic or foil photographic wood image glued to the surface of an (often) fiberboard base plank. Although cost-effective and a big hit with DIYers, laminate has, however, earned itself a downmarket reputation. But it’s the levels of formaldehyde used in the bonding process that’s the issue; formaldehyde is a known carcinogenic found in several popular building products and even some carpets.

Laminate flooring typically has little or no pure wood content at all. Formaldehyde is a common ingredient in the bonding compounds

Test results have been quickly revised
The CDC originally announced test results on February 10th indicating that formaldehyde levels in certain versions of laminate flooring sold at Lumber Liquidators could result in two to nine cancer cases per 100,000.

The new figures for the CDC released two weeks later now show that cancer risk levels are actually six to 30 cases per 100,000. What happened? Apparently, instead of using eight feet as the height of a standard ceiling (a calculation required to calculate formaldehyde concentrations in a room), the CDC had inadvertently used eight metres, approximately 26 feet. By inputting the lower correct ceiling height, concentrations were found to be significantly higher than first reported.

Reaction from Lumber Liquidators has been mixed.
While supporting the new CDC findings and having long-since removed the products in question from their outlets, the company maintains in a statement released to media that the risk of contracting cancer from their flooring is still extremely low, and claims the new calculations continues to “overestimate any potential health risks from these products.” A new, fully corrected report from the CDC is expected soon.

The company statement goes on to say “Lumber Liquidators has significantly strengthened our quality assurance procedures from enhanced compliance protocols to product sample testing…We remain committed to operating with integrity and delivering quality flooring to our customers.”

There’s good news, and not-so-good news. Which first?
If there is any good news to this story it is that formaldehyde levels tend to dissipate over time, meaning the problem is less severe now than when the Lumber Liquidators’ product was first installed. On the other hand, one could argue that the damage has been done, and those individuals physically affected can do little about it now except either join the class actions or rip up and replace the flooring themselves.