A cross laminated timber (CLT) house design that could change everything

Black mould build-up can be a problem in any house in the country, but never more so than in the homes of the Misipawistik Cree Nation near Grand Rapids, Manitoba. With the Saskatchewan River flowing through the area all year round, the atmosphere is constantly moist. Cheap ‘stick lumber’ construction, plastic vapour barriers, and poorly ventilated basements have become magnets for mould. The result? Homes simply decay and deteriorate over the course of a few years, leaving vulnerable young and elderly residents alike living in unhealthy conditions. 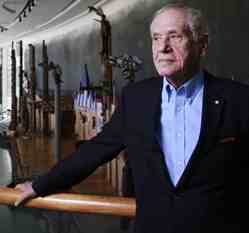 Douglas Cardinal is an Officer of the Order of Canada, and was awarded the declaration of being “World Master of Contemporary Architecture” by the International Association of Architects.

A world-renowned design talent
As one of Canada’s most recognized and internationally decorated architects, Douglas Cardinal is an Ottawa-based visionary who has combined his Anishinabe heritage with extensive experience with mould-sensitive projects, such as the Canadian Museum of History in Gatineau, Quebec and Thunderbird House in Winnipeg, and has applied it to the needs of First Nations housing.

Cardinal has designed homes that are factory-built from CLT’s (Cross Laminated Timber). Incredibly strong, easy to assemble, and with a promise to be mould-free and highly fire resistant, it’s a design accomplishment that could impact the way houses are built across the country. The Misipawistik certainly liked what they saw, and took out a $9 million loan to construct 30 of Cardinal’s 3-bedroom design.

Cardinal’s design addresses more than just mould.
According to Cardinal’s website “the design utilizes the principles of modularity, prefabrication and mass production. Furthermore, it is designed in a manner such that the modules can be shipped easily and assembled quickly by people with minimal training.” Using locally trained labour will thus develop the skills training needed to improve income and livelihoods in the area. 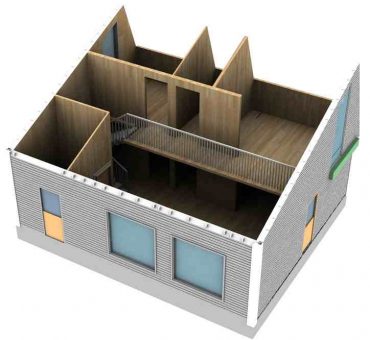 CLT houses: a template for the future?
Two key factors that address the mould issue are material choice and basements. First, Cardinal’s design calls for the extensive use of structural wood throughout. Lighter than concrete or steel yet easy to assemble, structural wood is far stronger and has a much higher fire-resistance than standard ‘stick lumber’ construction so often seen in residential construction. While structural wood is getting headlines for its increasing popular and appealing taller buildings, Cardinal is thus demonstrating that the material can be a better choice in low-rise and residential projects as well.

Using structural wood in pre-fabricated, full size floors, ceilings and roof panels means studs, joists and trusses are eliminated. “These panels can span 15 feet,” Cardinal told Canadian Contractor. Structural wood partition walls give additional support where required. Seamless high density foam insulation is sprayed on the outward facing surfaces of the exterior roof and walls panels at the factory level. This eliminates thermal bridging through studs as well as plastic vapour barriers where mould so often develops. The 4” thick panels arrive on site completely ready for assembly, complete with windows and doors installed. The result is an attractive all-wood interior wall that withstands live-in wear and tear much 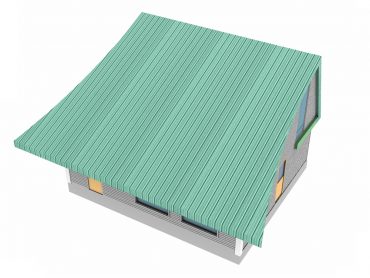 better than drywall. “Thus the design is able to incorporate higher quality material finishes that are more sympathetic to the cultural and environmental needs of First Nations people,” says Cardinal.

Houses lie on a foam block base
Secondly, Cardinal has eliminated basements from his designs. In his assessment, basements are a trap for moisture which then evolves into mould, even radon gas, under the main floors. Cardinal has developed a composite foundation technique that involves laying high density foam blocks on a prepared earth base, then laying the house’s main floor CLT panels on top of that. No basement and no mould traps, plus a house that is properly insulated from the ground up.

Pre-fabricated units that will cost between $250,000 and $300,000 each are scheduled to start begin factory production in Ontario this month (July) and be fully occupied by winter.