Brian Audia, A&G Roofing, Orillia, Ontario used to run his business strictly from his "instincts." He is finding a better way.

Part one of a two-part series: I learn not only how a business owner sees his company goals as attainable through coaching, but how his vision plays down to his team on the shop floor.

Brian Audia took over his family roofing business, A&G Roofing in Orillia, ON, when he was only 24 years old. An eager young man, he wasn’t content to remain a small, single-crew operation. Over the next ten years, Audia worked hard to grow and improve the business, guided solely by his instincts.  It wasn’t always easy. 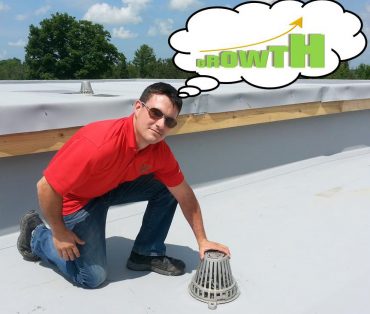 Brian Audia took over the family roofing business at age 24. Ten years later, his dreams of continued growth led to a commitment to business coaching

In late 2014, Audia realized things weren’t going smoothly. “The company had grown in revenue as much as it could do with just me doing the sales,” Audia says. “But although I wanted to grow more, it was a matter of either turning down business or making some fundamental changes in order to grow. I put a two-year plan together myself, based on hiring someone in sales. I  figured there would be a one-year transition year. We might not make a lot of money that year, but it would set us up for future years.”

Even that was not enough. “During that transition year, I began to sense that the whole thing was going to implode.”

A commitment to coaching and a defined company culture
Audia decided to join a business coaching network offering peer group discussions, one-on-one coaching, and special guest speaker events, on a scheduled basis. He’s never looked back or regretted the investment in time and money. “It happened at the right time,” he says. “I learned about my deficiencies and shortcomings, and realized I needed to address our company culture and my leadership before we could grow.”

The coaching has resulted in Audia focusing on a new business development plan. “It’s based on the principles of ‘Why you do it’, ‘How you do it’, and ‘What you do’ in that order, putting some language behind that, and getting our house straightened out so I can communicate the message clearly to the entire team.”

The ‘Big Why’
“Our ‘Why’ is family,” Audia continues. “The reason we exist is to build and encourage strong families. For example, there are major family problems in our area and in our hiring base: a lot of teen pregnancy, a lot of drug abuse, a lot of single parent situations, and a lot of young men who are displaced by family structures that are dysfunctional. A lot of these young men in their 20’s and 30’s have young families of their own, some amicable, some not, or blended families. I make sure they know this is a safe place to work practically, socially, emotionally and mentally, that they will be treated well, taken care of, and that the company cares.”

The ‘How’ is leadership. Audia uses informal opportunities to communicate his message of ‘How’ using training and mentoring. “People respond to strong leadership. People also respond to weak leadership. I pick my battles and try to be very consistent. In roofing, I have lots of opportunities to show leadership without having a formal meeting once a week. There are touch points five times a day if you look for them.”

Look after your employees and the results will follow
Audia’s ‘Why’ and ‘How’ have resulted in progress towards his company goal of growing from around 20 employees to close to 40 or 50 over the next couple of years. Looking after his employees is the key. “I’ve turned my attention to my employees, and invested in them.” That in turn will result in improved bottom line numbers for A&G Roofing. “My experience so far has been, if I invest in my crews and make sure they’re taken care of, they will make their own numbers and production.”

Bonuses based on non-monetary performance
That concept is reflected in the company’s bonus structure. “None of the KPI (Key Performance Index) metrics are based on production and profitability,” says Audia. “Crews are graded on the time they show up, how quickly they’re out the door —a measure of how prepared that team is at the start of the day— and how they regulate their jobs so that they’re done within 40 to 45 hours a week. Overtime is discouraged. Given how much production is lost by over-working a crew, you almost end up paying triple for the production you get from overtime, not to mention the end-of-season burn-out in our industry by September or October.”

“The number one job of any business owner is to care for and protect the people within your circle,” says Audia. “If you’re not willing to do that and put the work into it, nothing else will fall into place.”

Part Two: I talk to a couple of Brian Audia’s key staff, Adam and Jake, and learn how the focus on ‘Why’, ‘How’ and ‘What’ has impacted their work and their lives.

Related
How coaching is helping a roofer to reach his business goals (Part 2 of 2)
VIDEO: Contractor business coaching: One-on-one versus ‘peer groups’
Six ways to make your business better in 2017
Networking – not a dirty word but a great way to market your reno business