Craftsman leaps from the starting gate under new ownership

What’s your Craftsman story? Recalling the pride of this truly iconic American name in tools was the theme of the brand’s massive product launch in Baltimore this week. Some 1200 tools carrying the Craftsman label were unveiled in the dramatic fashion that has become typical of new brand owners Stanley Black & Decker. Each presenter, whether from the carpentry, auto mechancial or yard maintenance divisions, spoke of their personal connection to Craftsman experiences at some early point in their lives. 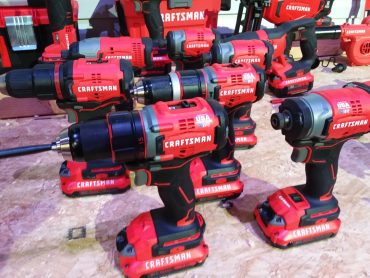 Many of the newest Craftsman products display a “Made in the USA” label, reflecting the pride felt towards this iconic American name.

“My dad had these tools in his garage.” “As a 12 year old, I was taken down to the hardware store each week to pick out $20 worth of Craftsman tools to form my own toolkit.” Memories of making things at a young age, often as a generational handoff,  continues to be a big part of the Craftsman aura today. And of course, pride – the pride that the company has actively promoted across its offerings since the brand was launched over 90 years ago; rugged enough for professional use yet value-priced for every day homeowners.

Craftsman is now part of the Stanley Black & Decker family

The Craftsman name has been associated with another iconic American name, Sears, for those 91 years. However, financial problems surrounding Sears resulted in the brand being purchased by tool giant Stanley Black & Decker (SB&D) in January 2017. In a multi-year agreement stretching over 15 years, SB&D paid close to $1 billion plus royalties for the name and its product development.

A brand strength through generational connections

The individual stories of personal connection to Craftsman is something that Jeff Doehne has noted since he started as General Manager of Craftsman 18 months ago. “People want to tell you their stories.” Doehne took the reins at the time of the brand purchase after a 12 year career in various marketing functions with SB&D. “One of things that has really stuck me is the legacy. It’s one of the most powerful brands – not just in the tools themselves but in brand recognition. It’s American; it’s what people know.”

Where will Craftsman fit in?

Stanley Black & Decker owns some of the best known tool brands spanning an immense variety of purposes and target markets. Where does Craftsman fit in, especially with the professional builder and trades? “We won’t be varying from what Craftsman has always stood for over its long history – great products, high quality, and great value,” Doehne told Canadian Contractor. “We’re going to deliver professional performance but at a value price. From a company standpoint, Craftsman fits in between Black & Decker – focussed on the DIY user – and DeWalt, which is highly professional and jobsite tough. We’ll continue to look at the high end enthusiast as well of the professional tradesman.” 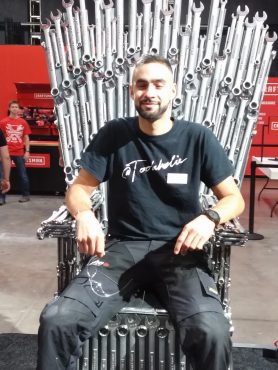 Kiefer Limeback of Toolaholic likes what he sees in the new range of Craftsman tools, and feels there is a place for them at the professional level.

“It’s clear there’s a lot of effort being put into the Craftsman line,” online tool reviewer Kiefer Limeback of Toolaholic told Canadian Contractor. “There’s a lot of ground-up designs. I’m really exited and looking forward to getting hold of the new stuff.”

Limeback agrees that there is place for Craftsman beyond the pure DIY homeowner level. “It’s a matter of what you see as pro grade,” he explained. “For example, if you’re primarily a framer but might need to do trim once in a while, I can see the Craftsman cordless nailer being a viable option, a lower cost alternative. I would say to invest in what makes sense for you. If there’s something you don’t use everyday, Craftsman can be your second tier.”

The break from Sears means new channels of availability

In Canada, Craftsman will have a little more work cut out for it than south of the border. The brand had only been available through Sears Canada, which filed for bankruptcy in June 2017 and has since shuttered its stores. The brand needs resurrection of its name against a dropdrop of an iconic Canadian brand also using the word “Craft” in its moniker. Gaining traction against potential confusion will be a challenge unique to Canada for Stanley Black & Decker’s marketing team.

One step the parent company has taken to get a jump start has been to sign up Lowe’s in the U.S. as a major retail partner. In Canada, a similar agreement with Lowes, RONA and Ace Hardware will likewise give the brand a strong and immediate shelf presence, with Amazon alongside as an online source. “Those are the key partners where customers will begin to see the new Craftsman products from October this year all the way through the front half of 2019,” Doehne said. “You can already see some the new products on shelves in Canada today.”

Also in its favor is Craftsman’s own product design and development team, with several new products now ready for market. In combination with Stanley Black & Decker, Doehne is confident about Craftsman’s ability to forge its place in the market. “We’re going to leverage Stanley Black & Decker’s innovation and technology in order to develop the right products at the right price points,” he said.