The Discovery Home pilot program includes three model homes built to Energy Star standards. Two others have been built to what Empire believes will be the future code.

VAUGHAN, ON, March 6, 2019 /CNW/ – Empire Communities, one of North America’s largest homebuilders, has just reached another milestone in their homebuilding history as they trailblaze the path for sustainable construction and energy efficiency. Using new technologies and materials above Energy Star and Ontario Building Code, the homebuilder looks to influence how homes are built in the future through its pilot program, the Empire Discovery Home.

The ground-breaking Discovery Home pilot program at their Riverland community in Breslau, Ontario includes five model homes, one of which is designed with some of the most energy-saving and environmentally conscious innovations being tested today. Their construction is not only an exercise in sustainability, but also an experiment in research and development that will have a large impact on how Empire will meet the lifestyle needs and demands of future homebuyers. 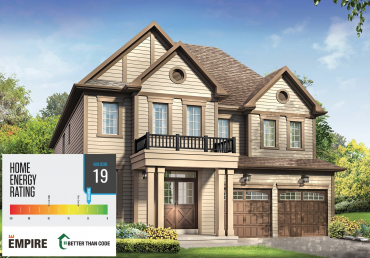 The Empire Discovery Home’s HERS index rating. The HERS index shows a home’s energy consumption and greenhouse gas emissions and is a validation that the energy performance of the home exceeds the Building Code in Canada.

“Empire strives to continuously grow and become leaders in the industry, and we are committed to doing this through innovation by piloting energy-saving technologies and building solutions into experiments that can be applied to new homes down the line,” says Paul Golini, Co-Founder and Executive Vice President, Industry Relations at Empire Communities.

Three of the five model homes were built to current Energy Star standards, while two others have been built to meet what Empire believes will be the future code, ensuring the homebuilder maintains a higher standard of energy efficiency compared to building code. The fifth home is the Hybrid Home, featuring the latest sustainability innovations, newest insulation materials and experiments in energy efficiency including solar battery storage.

“The Discovery Home looks like a typical new home build, but in between the wood framing, under the floors and up on the roof there’s plenty of new energy efficient features and innovative technology experiments happening,” says Stephen Doty, Manager, Quality Assurance at Empire Communities.

Since the beginning of the pilot project, data was collected to confirm that the construction methods and technology incorporated into the homes result in significant CO2 emission reduction. The Hybrid home produces 5 metric tonnes less CO2 than its code counterpart or one car off the road annually.

The homes were constructed in partnership with Empire’s industry partners – Dow Building Solutions, Rockwool and George Brown College who provided the materials and monitoring expertise for the homes. Additional materials and support were provided through RenewABILITY, Greyter Water Systems, A.O. Smith, vänEE, Panasonic, Aeroseal and AIRMAX and project management through Clearsphere.