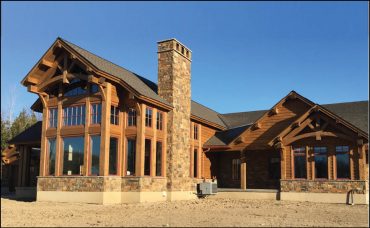 D.F. Crocker Ltd. took home first prize in the 2019 ITW “Show us your project” contest with this timber frame house.

Throughout 2019, fastener manufacturer ITW ran its annual “Show us your project” contest exclusively for Canadian Contractor readers. As in past years, the entries were excellent and the winner extraordinary.

In Part 1, we reveal the winner, with the runners-up to follow in subsequent parts.

Ben Crocker, vice president of D.F. Crocker Ltd. of St. Thomas, Ontario says the ITW fasteners he used throughout this award-winning house saved him tons of time and money, but not for the reasons you would expect.

“There was a lot of stuff in this project,” says Crocker. “Most of it we did twice, a lot of it three times, sometimes had to go back four times, changing stuff up. it was unlike anything we’ve ever been on, just the sheer scope and the size of that project, everything was crisp. The homeowner, everything was his vision and we just had to make it happen, whether it was a conventional approach or a completely different approach. That’s where the GRKs were just unbelievable because we just got to the point where we’re putting everything together with screws, and you have to change it, and you pull it apart, and you didn’t have to be ripping stuff apart like you would if it was all spiked.”

On the surface, it sounds like the GRK screws were great, but the customer was, as they say, from hell. “No, no. That’s the unbelievable thing about the customer,” says Crocker. “My dad was going nuts keeping up with the change orders, but the customer didn’t care. He just wanted what he wanted. We’d submit a bill and he’d pay it, and never, ever had an issue. We’re actually back at the house now on another build.”

ITW, manufacturer of GRK, never planned to make fasteners for structures built, dismantled, rebuilt, dismantled again and rebuild again, but it will enjoy the part it played in this project’s success. For his part, Crocker is happy for the durability that allowed him to respond quickly and efficiently to the customer’s needs for the life of this 23-month project. “Actually, a lot of it was designed by the homeowner. He spent five years planning this thing and wanted to really control the project and be really involved.”

With over 700 individual pieces of timber in involved in the structure, the demands on the framing crew and the Crocker team were considerable. The fasteners made a big difference. “It was actually the framing crew that got us on to GRK,” says Crocker. “Normally, when you have to use screws, you use deck screws, but they have no structural value whatsoever. But there was only, I think, three times where I snapped a GRK screw, and the only time it ever happened was when we were repetitively using them. They’re super strong, they never fail, they’re a great, great, great invention and a blessing to have in the truck.”

Lucky for Crocker, he now has another year’s worth of GRK screws (and a new Paslode nailer) to kick start 2020. Congratulations.

No Comments » for Fasten-anating, Part 1