Casey Edge looks at NRCan's uncovering of a significant Step Code issue, just in time for the rest of the country

Astronomers recently photographed a Black Hole — a churning abyss from which not even light can escape.  As the Washington Post reported, Black Holes “are places where space and time as we know them cease to exist, where the familiar parameters that define our reality lose all meaning.” I can think of similar places fitting that definition, including municipal councils, building permit departments and meetings of the Canadian Commission on Building and Fire Codes (CCBFC).

It is challenging to find reality in three days of CCBFC agendas, often filled with meandering discussions. Once in a while, however, a ray of light permeates the Black Hole and returns meaning to space and my time. In this case, it is a recent analysis by Natural Resources Canada (NRCan) of the B.C. Step Code.

NRCan uncovers a significant Step Code inconsistency
NRCan studied a theory that suggested, “Near the boundaries of climate zones, the absolute energy metrics used in the B.C. Step Code and the performance tiers PCF (proposed changes) [and the BC Step code] will require homes in a warmer climate zone to be better insulated [and therefore more costly to build] than identical homes in an adjacent, colder climate zone. This is because the locations will have similar weather conditions, but are afforded significantly different energy budgets.” 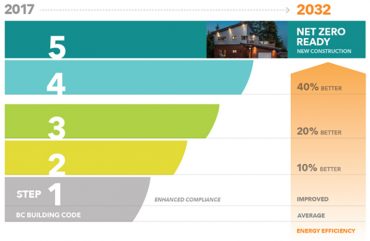 This theory was confirmed by NRCan research.
“Results show that identical homes in nearby communities generally have similar heating requirements, but are afforded significantly different energy budgets under the draft PCF. In every case, the community in the warmer climate zone received a tighter energy budget. Builders in colder regions of a given climate zone will face greater insulation and air sealing requirements than in nearby regions in the colder climate zone.”

NRCan’s Step Code study is a cautionary tale for the entire country
Because so many jurisdictions in Canada regard the B.C. Step Code as a model to be followed elsewhere, the study is intended to analyze the effects of implementing the Step Code across the country.For that reason, an analysis of Eastern Canada was included. 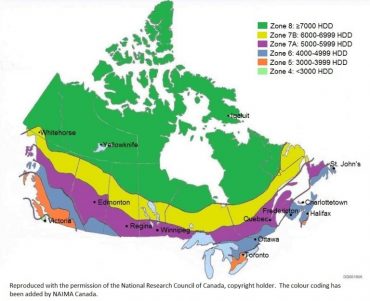 The Step Code sets different kWh/m2 targets by climate zone, and by Step Code target. For example, NRCan estimated the added costs for a home in Toronto (Zone 5) achieving the Step 2 level of 45kWh/m2 would be $4000 more than its Zone 6 counterpart in nearby Kingston, only 260km away. The Toronto home would, in fact, be better insulated despite being in a warmer climate zone.

Here’s another example, this from the East Coast. Step 2 builders in Yarmouth, Nova Scotia (Climate Zone 5) must meet a 45 kWh/m² target while in Greenwood (Climate Zone 6) that target is 60 kWh/m². The builder in the colder climate zone (Greenwood) is afforded a higher energy budget.

NRCan discovered, “In fact, the Zone 5, Step 2 compliant house is better insulated and more expensive than a similar Step 3 compliant house in the colder climate (Zone 6).”  Therefore, it costs more to build to a lower tier (Step 2) home in Yarmouth than a higher tier (Step 3) home in Greenwood, only 190 km away.

The Step Code contradiction emphasizes the prudence of being patient
What does all of this mean? The good news is that NRCan discovered a serious issue with B.C.’s Step Code, something most of Canada can address before adopting a similar energy efficiency code.  At the Victoria Residential Builders Association (VRBA),our position is to support a market-based program, like Built Green, based on affordability and proven practice. We will get where we need to go, but affordably and responsibly.

The bad news is that some B.C. builders and homebuyers are stuck with a flawed and confusing Step Code, including unnecessary higher costs, due to a provincial government and municipalities that chose to circumvent the CCBFC process.

This raises the question: What does B.C. Step Code Tier 5/ Net Zero Ready mean if it represents multiple levels of energy efficiency in different regions/ climate zones? Perhaps it means Net Zero Ready for more insulation in some regions!

Several years ago, the VRBA warned of unintended consequences resulting from fast-tracking energy efficiency and advised BC to wait for the Canadian Commission on Building and Fire Codes’ energy efficiency review, presently underway. Some listened, like the City of Langford, and wisely chose to support Built Green. Others, like the City of Victoria, adopted the Step Code. Now their residents must bear these unintended consequences. It’s not a coincidence that Langford also has the most efficient permit processes, the most affordable housing, and the largest number of housing starts, including rental.

Will CCBFC now do the right thing and avoid the Step Code on behalf of builders and homebuyers? Only time will tell. Remember this, however — time and reality have little meaning in a Black Hole. 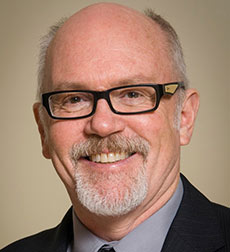 Related
When it comes to building codes, we get what we tolerate
Doing the Step Code Two-Step
Is B.C.’s Energy Step Code too much, too fast? (Part Two)
Radon and B.C.’s Step Code – A perfect storm (Guest Column)