Forget “Dumb Roofs”! Get ready for a revolution in residential solar generation

You’ve got to hand it to Elon Musk, best known as the founder of the Tesla electric car company. He has a gift for product innovation that shocks people out of their comfort zones. His latest foray into the future and where that might take us are roof tiles that allow light to pass through onto flat solar panels underneath, thus making the system indistinguishable from conventional roofs to anyone passing by. Some industry commentators are so impressed with Musk’s roof product that they are now calling conventional roofs nothing more than “Dumb Roofs”.

“Why would you buy anything else?” asks Musk

Musk’s tiles are made from an opaque, quartz-based tempered glass, and together with solar cells manufactured by Panasonic, Musk plans to put the whole package together, ready to be installed on a roof near you. You’d think that a coloured tempered glass tile would reduce the efficiency of the panel below, but of course you’d be wrong. According to Musk, efficiency currently decreases by a mere two per cent, and future tweaking might even result in efficiency being increased!

The key to Musk’s product’s curb appeal are the color and style varieties that include his ‘Tuscan Tile’ design for the California/Spanish look, and smooth and textured tiles that equate to asphalt tile roofs. When viewed, they live up to their billing from an appearance standpoint; you cannot tell that these tiles are special.

Not the first on the market, but maybe first-in-class 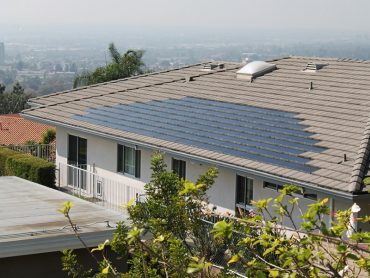 SunTegra roof tiles are more pleasing than solar panels mounted on racks, but still visible to the eye

Musk isn’t the first to come up with solar panel concepts that are more aesthetically pleasing than the utilitarian panel installations now a common site everywhere. New York-based SunTegra Solar Roof Systems has been installing their integrated solar panels onto roofs in the northeastern United State and California for a few years. Ergosun tiles from Solar Mass Energy Group also offer a solar tile product in a variety of colours to suit the house beneath. Solar Mass claims on their website that “the solar component of each tile is very strong and affords the same durability as the highest quality concrete or clay roof tiles available,” and “unlike traditional glass PV panels that are mounted on top of your existing roof and compromise the character and appearance of your home, our tile look like regular roof tiles, blending seamlessly with non-solarized tiles used to complete the roof.” However, neither product quite meets the aesthetic appeal of Musk’s new tiles. 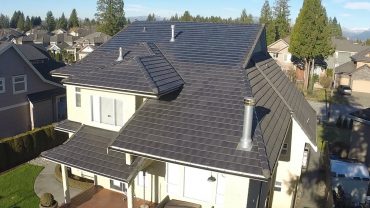 ‘Ergosun’ solar roof tiles are a close match to regular roof ties, at an estimated 15% premium

What do Musk’s pricing claims mean, and are they even accurate?
All of these solar tile products are premium products. For example, SunTegra claims their system is about 15 per cent more expensive if the home owner is in the process of replacing their roof. For his part, Musk claims that his tiles are as “tough as steel” and priced competitively with conventional roof materials such as slate and terra cotta tiles, once the electricity generation factor is calculated. Musk also claimed during a public announcement in November that his solar tiles “look better than a normal roof, generate electricity, last longer, [and] have better insulation.”

But is that an accurate claim? The Consumer Reports organization attempted to find out what Musk’s pricing claims really meant.  They looked at house with 3,000 square feet of roof area, and estimated that clay tile would cost $16,000, asphalt singles $20,000 and slate $45,000 (all costs in U.S. dollars).

With NZE homes on the way, maybe Musk is on to something
Making the case to spend that much on a roof when one is in fact paying up front for years of electricity at unknown future prices is a tough sell outside of the uber-luxury market. But Musk has to start somewhere, and given the publicity he generates whenever he speaks, we might see more of these ideas coming onto the market in the very near future as NZE homes become the norm over the next 15 years.