It comes as some relief to members of the Fort McMurray Construction Association to learn that contracts for re-building their city are now being issued to local contractors by the Regional Municipality of Wood Buffalo. In a release dated May 26th, the Ministry of Economic Development and Trade says that “of the 532 contracts signed by the Regional Emergency Operations Centre so far, about 80 per cent are with local employers from the Fort McMurray area. Businesses from outside the region are only contracted if there are no local businesses in a position to do the work….usually for complex projects that require specific expertise not available locally.” 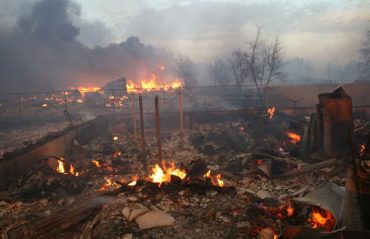 Vocal support for local businesses rebuilding their own City
Danielle Larivee, Minister of Municipal Affairs said in a separate release “We know the health of the business community in Fort McMurray is integral to the health of the community as a whole. Our government is committed to supporting Fort McMurray residents throughout the recovery process, and part of that is ensuring local residents and businesses can find work helping to rebuild their community. We are behind Fort McMurray and will continue to work with all of our partners to ensure that happens as we see this recovery through.”

Deron Bilous, the Minister of Economic Development and Trade emphasised that the Province itself intends “to work with local suppliers for any recovery-related procurement under provincial jurisdiction, providing a preference for competitive bids from local firms”.

Minister frustrated with media reports
However, Bilous felt the emphasis on local contract allocations had not been fully appreciated in some media reports. “It’s frustrating to see misinformation out there about the great work being done by the Regional Municipality of Wood Buffalo. The contracting for recovery and cleanup is being led from Fort McMurray by residents of Fort McMurray, and they have done an excellent job of ensuring local employers are being used whenever possible.”

FMCA comments were aimed at the province, not the municipality
Last week Fort McMurray Construction Association President Charles Iggulden explained his frustration to Canadian Contractor magazine concerning a Ministry of Agriculture & Parks registry of approved contractors that did not include his FMCA’s members, potentially disqualifying them from provincial contracts. (Numerous attempts to contact the Ministry by Canadian Contractor were ignored). However, Iggulden was hoping upcoming local round table meetings later that week would result in local contractors finding rebuilding work once the municipality took over from the provincial state of emergency.

These meetings seem to have occurred, bringing together the two provincial Ministers, the RMWB, the Alberta Chambers of Commerce, the Fort McMurray Chamber of Commerce, the Canadian Red Cross, the Insurance Bureau of Canada, the Athabasca Tribal Council and the Northeastern Alberta Aboriginal Business Association.

Melissa Blake, Mayor of the Regional Municipality of Wood Buffalo reiterated the province’s position. “I’m so proud of the work being done by Wood Buffalo employees throughout this disaster, including their success at ensuring that local companies and local people are spearheading the recovery efforts.”

Hiring of locals for cleanup is complicated by multiple interests
The cleanup and rebuilding process is a multi-level, multi-stage process that will take considerable time, a matter complicated by the combination of provincial mandates, municipal contracts and private insurance companies responsible to policy holders.

Beatrice Floch, owner of Spirit Staffing & Consulting Inc., an Alberta-based and Aboriginal women-owned firm specialising in recruiting manpower for major projects,  described the involvement of insurance and restoration companies to Canadian Contractor. “The restoration companies we’re working for are selected by the insurance companies because they count on them to know what they’re doing. They’re known world-wide and specialise in disasters; they were engaged in Hurricane Katrina, the BP spill, fires around the world.”

Restoration companies hire companies like Floch’s to find the qualified staff they need. Spirit is one of several recruitment firms involved; others include Drake International and Alberta-based Mills Personnel Group. “They will engage a vendor like us because we can have people at our fingertips if they need a plumber, an electrician, a person for cleanup. We do the fit-testing; we get them all prepared with their safety kits, we do their security clearances.”

Hiring locals is a priority for Spirit’s clients, but not for all
“Part of our mandate is that Fort McMurray evacuees are number one on our list,” said Floch. However, one recruitment company identified in media reports as Calgary-based About Staffing had to rescind job offers to locals when their client TBM Service Group Inc. of Mississauga Ontario decided at the last moment to hire Ontario workers instead.

The response to re-building job opportunities has been very strong. “We had over 1000 people come to our career fair alone,” said Floch. “We had six busloads from all the First Nations across Alberta applying for jobs. We were overwhelmed and we were only hiring between 300 to 500.”