From Russia with love Part 2: Launching a business in Toronto

"Andrei, you are really helping me. I am going to start paying you."

From Russia with Love is the story of Sept/Oct 2019 cover contractor Andrei Sosnovsky’s journey from  a law degree in Belarus to contracting success in Canada. In Part 1, Sosnovsky comes to Canada via Timmins, ON in 1996 to discover a country very different from what was expected. Part 2 brings him to Toronto and business ownership.

That’s how I ended up on construction sites. I was making no money and starting working construction in Timmins and after leaving Timmins for Toronto in ’97, I continued 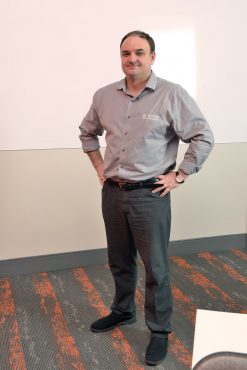 . Very soon, I was intrigued and I wanted to learn everything I could learn.
I worked for Polish renovators in Toronto. One time, me and my Russian friend took out 17 tons of brick and masonry block over a weekend from a walkout basement where we had to walk uphill to carry all this stuff by hand in plastic bins to load in a dumpster at street level. The Polish guys thought, “Oh my god, who are these guys?!” We were like maniacs and I loved it. I continued to teach martial arts after work. Then in the evening this Polish guy named Caesar would come in to do plastering. It looked like art to me and he was so good at it, so I approached him to ask if I could work with him. He said, “Andrei I can’t pay you any money but sure, if you want I can teach you.” So, after my class I would return to the job site. He had a day job but he really liked taping and plastering and I would come in and he would hold my hand and he would put a putty knife in my hand and he would show me where to press and where to scrape. We would work till midnight at times. He was good to me and I learned the trade and eventually he said, “Andrei you are really helping me. I am going to start paying you.” And I got better and better and he got a better job and went to Calgary and he passed all of his clients in Toronto on to me. He had very good clients.

How did you eventually find yourself in business?

Around 1999, I assembled my own computer with parts that I bought here and there and posted my resume on the internet. Half a year later I had forgotten all about the resume but I got a call from P&C Construction and they ask me, “Are you looking for a job?” and I said, “No, but how much are you paying?” He said, “$20 per hour,” and I said, “what?” because I was making around $12 or $14 at the time. I said, “Yes, I am looking for a job!”
It was commercial work. Offices, steel studs, etc. The Polish guys were sad to see me go. I was supposed to work at the IBM building offices but I was asked to go to Toyota for one day and never ended up at IBM. The foreman, a really good guy, Bob Belisle, liked me and he said, “there is no way I am giving this guy away.” He was a carpenter for 47 years, a good guy that had seen it all. I worked under his supervision at Toyota. Then Toyota said why don’t you work for yourself? I asked P&C for a phone because I was being called all the time and I thought they should, so I asked, “Can you give me a phone.” I was paying for my own phone. Phones were expensive. I guess it was only $40 per month but it was still a lot of money for me. They refused. In 2001, I opened my own company. Toyota was my only client.

How did you end up in residential?

I was always attracted to residential work. Commercial work is good money but there is no feeling of fulfilment. Nobody appreciates your work. Nobody cares because it is a big corporation. As long as you get it done on time, as long as you don’t make any big surprises…as long as it is quiet, it is good. But nobody says, “Thank you.” In residential, I felt I could make something beautiful out of nothing. I could create something. So I left my assistant at Toyota and I moved on to pursuing the residential projects. I hired a designer and I hired Roman (the current Project Manager at Sosna) and another carpenter, and so on and so forth. And now we have 17, 18 employees, I guess.