Futures We Like: Getting your Profit and Loss statement in order

Canadian Contractor worked with four contractors from across the country to help develop a budget and a business plan. From the conversations, we learned that the first building block to a successful plan is an accurate Profit and Loss statement (P&L) with the expenses properly allocated.

Structuring your Profit and Loss statement

Every construction company P&L should separate the costs of its construction projects from the costs of running the company in order to determine if the projects are being built profitably. The basic structure of the report should have headings similar to this:

Figure 1 (below) shows one of our company’s P&L statement. It’s clear and factual, but it does not separate the cost of the jobs from the costs of running the company. You can see there is a line called “Gross Profit,” which would be the profit realized after Cost of Good Sold (COGs), but no COGs appear . We’ve collapsed the report for simplicity but in the full P&L there are lines below the GP line such as Materials at $254,776, Subcontractors at $235,850 and Permits at $1,339 that should be above the “Gross Profit” line and would provide some idea of the cost of doing the projects. 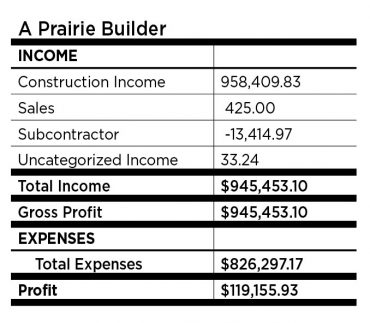 Figure 1. There is no Cost of Goods Sold (COGs) being recorded on this P&L.

Figure 2 (below) shows a example of another company’s P&L with the COGS properly distributed. In the expanded version (not shown), the categories of expenses with in the Cost of Goods Sold include Building Materials, Disposal, Equipment Rental for Jobs, Subcontractors Expense and Tools and Small Equipment.

Both P&Ls are accurate and represent the company’ performance, but the first P&L does not help the owner understand properly how his jobs are doing. 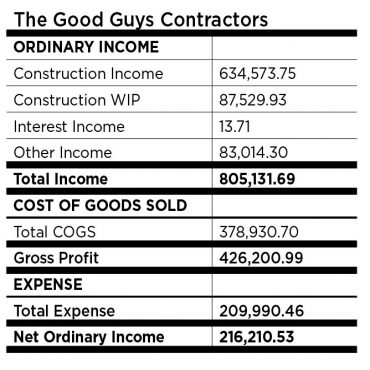 Figure 2: The expenses are properly distributed between Cost of Goods Sold, which represents the cost of the jobs being done and Expenses, which represent the costs of running the company.

When the costs are properly distributed with COGs shown above the GP line , you can quickly see what the profit on the jobs themselves is. For renovation companies, the target for COGS is between 60 and 70 percent, which means you should be looking for a GP of between 30 and 40 percent.

Sorting out owner’s compensation for COGs

Figure 3 (below) shows another of our contractor’s P&L. In this case, he has named COGs “Cost of Sales,” but the name of the category is not as important as how the costs are shown, and this P&L provides the information correctly distributed. 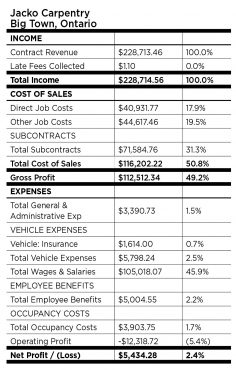 However, there is something else equally important to accurate P&L reporting. His total Cost of Sales is $116,202.22, which give him a GP of $112,512.34, or 49 percent of revenue. That is too high a gross profit. (Remember, the range of GP is most likely between 30 and 40 percent.) It is clearly too high to be accurate. Further digging revealed that about 70 percent of his time is spent working on site, yet his compensation is shown below the GP line. That means all his site labour is not being counted as COGs, and is skewing his COG number much lower than it should be.

It’s a common mistake in renovation companies with revenue below $1 million. The owner is working on site (above GP in COGs) and on the business (below GP in general expenses) and it becomes too hard to separate his pay between the two. But separate you must if you want an accurate GP number to work with in budgeting and planning your future.

When you, the owner, are on site, you should pay yourself the same amount as you would pay someone else doing the same work. Keep a timecard and submit it as you would expect any of your employees to do. If you are bookkeeping correctly, that cost will appear above the GP line. Then pay yourself a salary for the work you do as the owner. So, for instance, if you work as a carpenter on site, your total compensation might be $43 per hour (total compensation includes wage and burden, which is the cost of EI and Worker’s Comp, etc.) This amount will appear above GP. As the owner of the company, you might pay yourself a salary of $40,000 per year. Properly recorded, this amount will appear below GP and give you a more accurate picture of your Cost of Goods Sold.

One more thing: The net profit for this company is a paltry 2.4 percent. Your goal should be between 10 and 20 percent. This P&L tells me the owner is not charging enough and that is where we’ll go next.

Related
The Top 3 accounting methods and the lies they tell to contractors
Do you know your gross margin or gross profit? Compare it to our OutRank by Rogers Salary Survey results right here
Employee Profit-Sharing: A double edge sword?
If a layman can buy your business and still make a profit, then that business has value.