Getting familiar with Green Roof basics

Is the Green movement growing grass under your feet?

Studies suggest that home buyers are willing to pay more for homes with green features. One U.S. study concluded that “home sellers, realtors and appraisers who are not factoring in energy efficiency when selling a home are leaving money on the table.”

One question that a new home owner might bring up is the ‘Green Roof’. Green roofs are not new; they’ve been used for centuries to not only insulate the building but to actually prolong the life of a roof and reduce storm water runoff.

Basic nomenclature: Extensive vs Intensive
The Extensive Green Roof:
These are popular with the smaller, often non-accessible spaces of residential rooftops, even roofs with slopes, and are successful at reducing storm water runoff and insulation. They are relatively simple in technology, and may not even require special irrigation of drainage systems.

The Intensive Green Roof:
On larger spaces like commercial rooftops, these can support larger shrubs, even small trees, and are often used as common or recreational spaces and in some cases for wildlife habitats. They are more advanced than the extensive green roof and therefore require special irrigation and drainage systems. 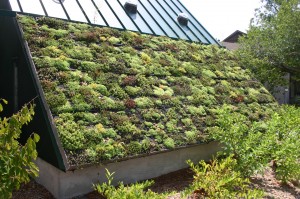 Green roofs on homes can be used on slopes as much as 45 degrees. Due to their UV absorption, they reportedly increase the life of a roof by 200 – 300%. There may however be a need to add reinforcement to a new or existing roof structure to support the additional weight of the various layers. These typically consist of a soil layer and root barrier, then a storm water management layer and finally the protective layer on top of the roof itself. However, modular installations using self-contained trays are increasingly popular since they can be both less expensive and much faster to install, plus have the advantage of quick design modification and the ability to access the underlying roof structure for repairs over time.

Things to investigate
Although green roofs are permitted by most municipalities, it is important to understand local bylaws in terms of privacy/overlooks (if the rooftop is accessible), roof stability, plus snow and fire hazard regulations. Some cities like Toronto have published green construction standards that speak specifically to green roofs.

Costs can be very high for green roofs, and your client will have to balance pricing that ranges from $12 to $50 per square foot, depending on the type and system, with longer term energy cost savings estimated at 25%-50% and the extended roof life benefits.

However, there may be grants available for your customer, depending where they live. The City of Toronto for example has grants for both residential and commercial green roofs, helping make it the 4th largest green roof market in North America.

Go with a pro
As always, installing a green roof is not a job for the amateur. As a contractor, you are strongly advised to liaise with a green roof specialist from the time of inception through to installation to be assured of all the lasting benefits.

Related Stories
Does your client want a green roof? Read this first!
Ice Dams: Coming this winter to a roof near you
The Big Orange goes Green
What will it take for home builders to embrace the Green?