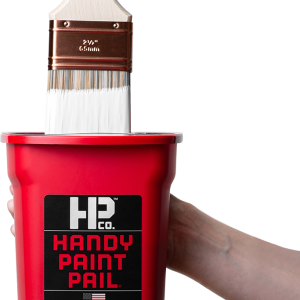 Handy Products, makers of the best-selling Handy Paint Pail, is celebrating its 20th year in business. Since beginning as a coffee can, some duct tape and an idea in 2001, Handy Products has evolved into an iconic line of products among professionals and diy-ers looking for an easier way to tackle home improvement projects. Over the last two decades Handy Products has made huge strides as a family-owned- and operated business, including: selling more than 15 million Handy Paint Pails, donating more than 2 million dollars to organizations like the Leukemia and Lymphoma Society, Boys and Girls Clubs of Twin Cities, Second Harvest Heartland and the Sanneh Foundation. The company was also named Vendor Product of the Year Award from Sherwin-Williams in 2004, received the Vendor of the Year Award from Sherwin-Williams in 2010, 2013, 2015 and Handy Products’ painter’s tool bag won vendor product of the year in 2020. In its 20-year run, the company has sold products all over the world including in Australia, New Zealand, Japan, France, UK, Canada and Israel.

To celebrate this accomplishment, Handy Products will be traveling around and stopping at professional paint shows to hand out products to the community.