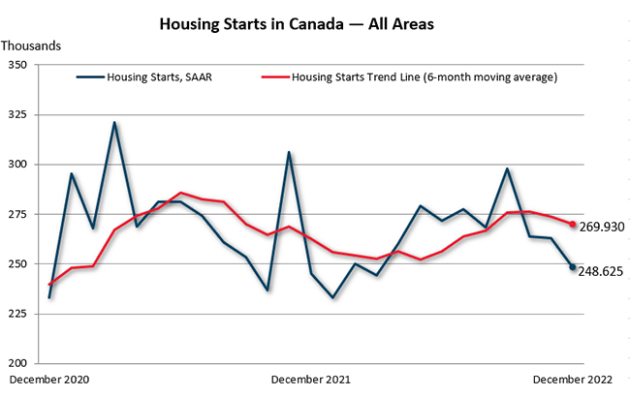 Canada’s housing starts remained at an elevated pace throughout 2022 despite running into a decrease in December. According to the latest report from Canada Mortgage and Housing Corporation (CMHC), the seasonally adjusted annual rate (SAAR) was 248,625 units in December, down five per cent from 263,022 units in November. The SAAR accounts for any predictable changes that could impact rates on yearly basis.

Total urban starts also experienced a decline in the CMHC numbers, coming in at 227,708 units in December. Multi-unit urban starts decreased four per cent to 182,850 units and single-detached urban starts experienced the highest fall, with an 11-per-cent decline to 44,858 units. CHMC estimated a SAAR of 20,917 for rural starts. Compared to the six-month average, the trend in housing starts was 269,930 units in December, down one per cent from 273,801 in November, but still elevated from a historical perspective.

The slide was not felt in Canada’s largest cities, where Toronto, Montreal and Vancouver all posted increases in total SAAR starts. The Toronto Census Metropolitan Area (CMA) concluded 2022 at 45,019, 7.6 per cent higher than the previous year; the highest level since 2012, when 48,105 units were reported in the CMHC figures. Pacing Toronto’s gains were the 38,780 starts in the multi-unit segment in 2022, the largest number on record.

“The rate of new construction continued at an elevated pace in 2022 overall, ending the year with actual total urban starts at 240,590 units in Canada, similar to levels observed in 2021,” said Bob Dugan, chief economist at CMHC. “While these additional units will provide much needed supply on the market, demand for housing in the country will continue to grow. We need to find innovative ways to deliver more housing supply and keep building at a higher pace in the coming years to improve affordability.”