How HomeStars and TrustedPros are trying to sniff out false reviews

HomeStars and TrustedPros, two of the leading contractor review websites in Canada, post hundreds of customer reviews each week and boast massive information databases. It’s a growing on-line landscape riddled with challenges, particularly when it comes to review verification.

“It’s on the internet, so it must be true”
It’s important to understand how the HomeStars’ and TrustedPros’ review verification systems works, and how these sites can in fact help your business from being victimized by false reviews.  After all, false reviews undermine credibility, which is bad for everyone: consumers, businesses and the review sites themselves.

Fake positive reviews are posted by disreputable operators in an attempt to float a company’s name to the top of a page, where they can then misdirect potential customers who don’t scroll down.

Equally damaging are bad reviews, particularly if they’re unfair or result from a misunderstanding that could have or should have been mediated. Sometimes fictitious bad reviews show up on sites, planted by unscrupulous competitors. Or maybe it’s blackmail; one recent  ‘false bad review’ for bathroom renovations, was an intentional attempt to squeeze a $1,000 discount from the contractor.

Make yourself part of the solution
In order to confirm the veracity of reviews, HomeStars and TrustedPros have each initiated disciplined procedures to investigate any that are suspicious. In conversation with Canadian Contractor, the CEOs of both companies spoke of dedicated teams of real people who read every incoming review, often confirming with both the consumer and contractor that actual work was done.

All reviews, good or bad, are sent to the contractor prior to posting. Equally important to the confirmation of good reviews is the resolution of unfavourable ones. Both HomeStars and TrustedPros suggest contractors should never ignore an unfavourable review. “Even after a review goes up, the company can and should engage the review on-line to indicate their willingness to resolve any shortcomings,” says HomeStars CEO Nancy Peterson. “It indicates a willingness to respond, which will be viewed positively by other readers.”

As an example, HomeStars has a review listing for itself, and their on-line interaction regarding less-than-stellar reviews of their services illustrates how engagement should be done.

TrustedPros’ CEO Max Sheppard says, “If the contractor is able to provide documentation that clearly proves the comments are factually false, we have no problem either altering or removing that review.” Of course, if you don’t respond, the post goes up as is.

New features based on proven data
Over time, HomeStars and TrustedPros have built a file of knowledge regarding the most-reviewed companies that includes a company’s engagement with the site as described above. Both have turned this data into newly-announced customer features.

Trusted Pros new rating summary ‘TrustScore’ offer a clear summary of past reviews, including those that were unverified or suspicious

Trusted Pro describes their new “TrustScore” system as “a stringent five-point rating system that grades contractors’ performance along 14 verticals before assigning them an aggregate score. The rating criteria include authenticity of reviews; supplier, creditor, and employee complaints; transparency of business practices; endorsement by peers; time in business, etc.” 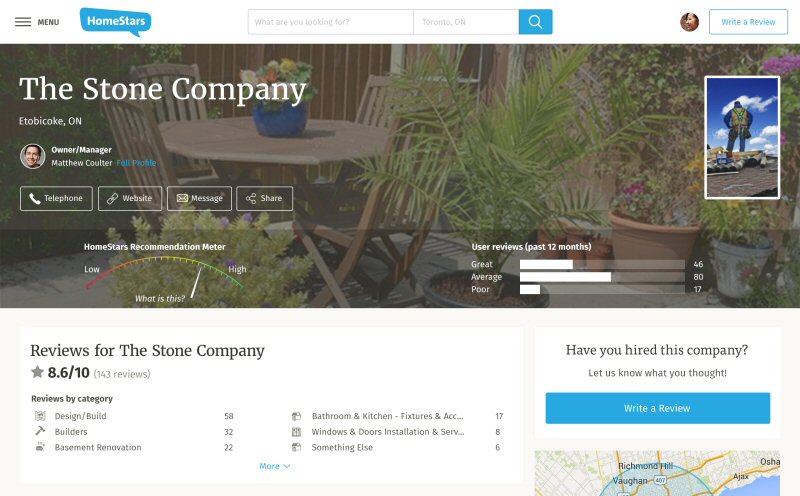 For its part, HomeStars calls their similar system ‘Scorecard’, and combines it with a HomeStars Recommendation Meter.

The never-ending search for truth
As TrustedPros’ Sheppard himself admits “no website may ever be able to sniff out every fictitious review. People looking for shortcuts and loopholes will always find ways to bypass the best detectors and plant deceptive reviews.”  Therefore, both companies encourage the industry to engage with them whenever a false positive or false negative review catches their attention. Working together ultimately results in a more satisfactory experience for the consumer.

Want to learn more?
Check out these links

Related
Got a bad review on HomeStars? Read this interview with their CEO on what NOT to do about it
Alec Caldwell: It’s time to do away with anonymous negative online reviews of contractors
"The idea of a company paying for its existence on the site (HomeStars) speaks volumes…"
Survey: 75 per cent of homeowners did NOT check online reviews before hiring contractors