Why install torched-down modified bitumen on a combustible roof structure?

Part One of our Two-Part, Flat Roof series looks at the hazards of open flames

Fires caused by open-flame propane torches on flat roof installations splash across the news on a fairly regular basis, like the one in Toronto recently that burned down an entire row of new townhouses. They call into question whether old-school torched-down asphalt-based roofing makes sense in residential construction any more. After all, there are a number of alternatives that are safer to install.

The world is going flat
Commercial roofs have long been flat. Look at any strip mall, big box store, office or apartment building and one sees flat roofs everywhere. Flat roofs are now becoming more popular in residential construction and renovation work too, if not for the entire building then at least for a good portion of an addition. 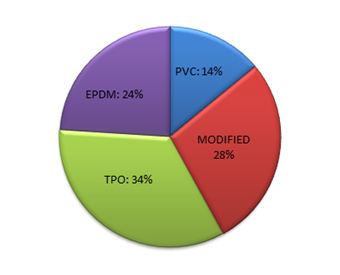 Modified bitumen roofing represents less than 30% of commercial roofing installations, according to figures from the National Roofing Contractors Association

Yet in the meantime, modified bitumen roofing materials have declined in popularity  to less than 30% of the overall commercial market according to the U.S.-based National Roofing Contractors Association, with the torched-on variety of that material now standing at only a fraction of even that.

While flat roofs grow, modified bitumen declines
There are several reasons. Cost over time is one. One source suggests that although an asphalt-based roof assembly may be less expensive at the outset, its realistic life is around 15 years due to a drop in asphalt quality over recent years, at which point significant repair or replacement is required. This calls into question the longer term financial attractiveness of modified bitumen.

Critics also suggest that warranties are often vague, short, non-comprehensive, subject to numerous restrictions and specifications, and do not cover workmanship or labor. There is also an argument to be made regarding the environmental damage of modified bitumen, given its projected life span and non-recyclable materials, and health issues for the installers themselves who work in the smoke and fumes produced.

Torched-down roofing is banned in New York City (and elsewhere)
However, it is the issue of safety that regularly draws attention to the pitfalls of torched-down systems. 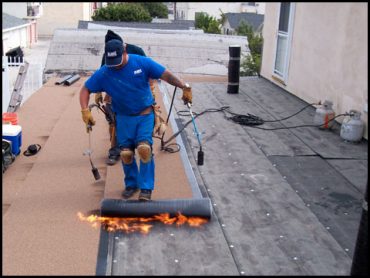 Torched-down roofing on a residential building. What could possibly go wrong?

A flash fire caused by inappropriately handled propane torch is not the only hazard. Fires can smolder under the deck, in the attic space for example, before erupting hours later when the crew has left the site. New York City banned  the installation of torched down roofing on combustible roof decks in 1999, nearly 20 years ago, and included sanctions against, and potential arrest of, any board members, engineers, architects, attorneys, managing agents and roofing companies complicit with the specification and contracting of torched down roofs on combustible decks. They are not the only U.S. city to take this action.

Yet there is a near-complete lapse in government mandated health and safety regulation in this country concerning torched-down roofing. Canadian Contractor surveyed various provincial government websites and observed that although several quasi-governmental agencies and associations issue manuals and recommendations regarding safe handling of propane torches, tanks, and asphalt kettles, governments themselves are largely silent, focusing their attention on fall prevention. In Ontario for example, a Hot Work Permit may be applied for, if required by the client or municipality, however even that is a rather vaguely worded document covering various types of work that involve high heat. 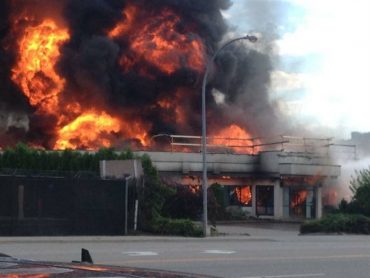 It started on the roof, and took the whole thing down. Weekly news somewhere in this country.

Common sense usually prevails, though often without regulation
Nevertheless, most quality roofers do use common sense, placing two workers on the roof at all times during installation, plus ensuring the nearby placement of fire extinguishers. However, Brian Audia, President of A&G Roofing in Orillia, ON, observes that safety recommendations seem to come from those likely to lose the most money in the event of a fire. “A lot of the mandates to conduct a two or four hour fire watch, have two people on the roof at all times, fire extinguishers at the ready and that sort of thing comes from the insurance companies,” Audia told Canadian Contractor. But those insurers will run if the roofer slips up. “If you set a building on fire inside of your fire watch, you’re on your own!”

Audia adds that while periodic propane safety training is mandatory in his firm, there seems to be a lapse in overall regulatory enforcement.  He explains that the Construction Safety Association (CCA) states only that propane must be stored outside. As far as the Technical Standards and Safety Authority (TSSA), Audia says their site inspectors lack the ability to fine, and simply issue orders and reports on any safety lapses. “They can’t fine you the way the Ministry of Labour can. They’re more like advisers.”

Not suitable for residential?
Torch-down roofing has a rightful place in certain applications, Audia maintains (more on that in Part Two of this series). However, that may not include residential work, given the combustible nature of those buildings. “A lot of the time the gap is in the knowledge base,” he says, suggesting to Canadian Contractor that often the roofing specs are not specific enough. “The job is engineered by an architect or consulting firm. The tender process is administered and the contract is awarded to a general contractor. The general contractor signs off that he’ll do all the things like assurances of safety tickets, thus assuming the risk. They then pass those risks off to the sub-trades. The roofer comes in and says, ‘My favorite system is torch-down’. They’ve submitted their liability insurance to the contractor, they go and torch it, and in the process burn the whole thing down.”

Fires like the recent one in Toronto will happen again until the entire chain of command, from government through to the engineers, designers and contractors, smartens up.  “Unless they attend some product knowledge events or someone in their office knows, it’s all haphazard,” says Audia. “Right now, there’s no law that says there can be no open flame on a wood structure. It’s bizarre.”

Part Two of this series will examine the alternative roofing materials that are sealing flat roofs across North America.

Related
Four alarm fire apparently started by a roofer’s blowtorch
Putting a lid on flat-roofed homes (Part Two): New alternatives
The right materials for flat and low-sloped roofs
Ice Dams: Coming this winter to a roof near you

2 Comments » for Why install torched-down modified bitumen on a combustible roof structure?