I conclude this series about body injury caused by stress and strain in construction, with expert advice on how injury can be avoided before the pain killers are required.
Read Part One (Medical marijuana on the work site)
Read Part Two (The opioid crisis in construction)

Leading Ontario chiropractor Dr. Lawrence Lafrance sees it all in his practice north of Toronto. He calls them “The Wounded Warriors of the Construction Industry,” mostly males, 35 years and older, all shapes, sizes and body types. 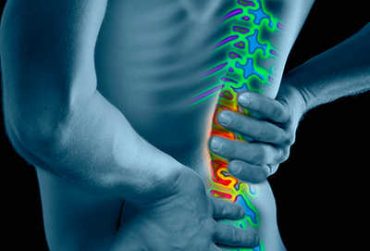 Lower back pain from twisting and bending is the most common construction injury seen by chiropractor Dr. Lawrence Lafrance

An issue of dollars and cents, and lost man-hours
From a business standpoint, running an efficient and productive work site means a crew of workers performing their functions at a high level of efficiency and effectiveness.  It would seem obvious therefore that site supervisors put procedures in place to reduce the risk of losing man hours to injury.

Everyone is a loser if the worker misses hours at work or can’t perform properly. “It’s not just efficiency; it’s effectiveness,” explains Lafrance. “They can be working around the job site, cleaning up, doing things that are important, but they’re not necessarily getting a lot of productive work done. Maybe they can’t bend and twist and lift the way they should be able to, thereby preventing them from nailing wall framing to the floor or sheeting on the roof.”

Being a work site ‘grunt’ isn’t the same as being efficient
Lafrance has an issue with the worker who takes on too much on their own. “Instead of saying, ‘I’m strong enough to lift this wall frame by myself’, thinking that’s efficient, it’s better to get two or three people together. Of course, there’s the dollars and cents side of the argument of that, but the other thing is that people are getting hurt. They’re getting hurt because they aren’t working smart.”

Abdominal Crunches:
1. Lie on back with knees bent, feel flat on the floor and hands resting behind the head.
2. Suck stomach in to curl body up until shoulder blades are off floor
3. Keep stomach sucked in as you lower back down
4. Keep chin in neutral, elbows back and do not pull on head

Action steps for workers and employers
The most common issue Lafrance sees in his practice are repetitive strain injuries at the base of the back from bending and twisting. “Hand dominance, foot dominance, doing things the same way over and over; that’s basically working in construction,” he says. “The simplest advice is to bend the knees more, and to get loads as close to the body as you can to increase leverage. The leverage gain by moving a load close to your body is almost 100 times as when it’s at arm’s length. That extra load is transferred to the back. Another thing; get to the level where you’re working! For example, if you’re working at floor level, get down on your hands and knees rather than bend over. Square yourself to the work.”

Another basic issue is the simple act carrying and moving tools, whether they’re in a bucket being hauled up to the next floor or on a belt that is loaded to one side. Lafrance likes the analogy of a car tire. “A tire that’s out of balance shakes and wears out very quickly. A tire that’s properly balanced can go for 100,000 kilometres.”  He recalls a patient in his 30s who, despite being very fit in his core, got into trouble because he had to repeatedly walk up several flights of stairs with a bucket full of hammers, saws and other tools, all in one hand. “The simple solution was for him to get two buckets, one in each hand, to get better balance. It’s sounds ridiculous but it really helped.”

Cat Arch:
1. On floor, on hands and knees
2. Let head relax down, suck stomach muscles in towards the spine, and arch spine up to the ceiling like ‘an angry cat’

How about coordinated action from the company itself?
In addition to the business arguments about productivity, employers simply owe it to their employees to care about their well-being. Planning each step of a project should include consideration for the most effective use of crew resources around the site to eliminate potential body strain problems and overloads. It would also make a lot of sense, for example, if everyone on the work site started the day with 10 minutes of group stretches. As hard as it might be to imagine a crew of guys doing that, it would make a difference, thinks Lafrance.  Even taking breaks to stretch at lunch or at the end of the day would help. “We’re only talking about eight to 10 minutes a day to save your back. That’s an important message to get across to a 20 year old construction worker. It’s much harder to change when your habits are set.”

Masking pain through medication?
Despite preventative measures being readily available, many in construction turn to prescription drugs to mask their pain, something that troubles Lafrance. “My concern is whether the worker is aware of what is happening to their body that causes the pain in the first place,” he says.  “Are they hurting themselves more because the pain is artificially blocked?”

Medications do have their place, however. “During the healing process, they can be useful,” Lafrance says.  “You go from a phase where there’s lots of inflammatory response and tissue reorganizing, to a point where you’re almost there, almost healed.  And then, as long as you don’t do something that will put you at risk, you can get back in the game.”

It all boils down to simple truths when it comes to avoiding Lafrance’s chiropractic bench or staying home to rest. “There’s positive load, like doing exercises and lifting properly. Those stresses make us stronger. And then there’s negative load, and that’s when we get injured.”