The Leftovers: How aspiring apprentices were short-circuited by a college faculty strike

It’s Part Two of our Electrical Week series! This installment exams how a strike at Ontario colleges this past autumn impacted dozens of young apprentices

Everything was going great for Alex this past fall. He was a fifth year electrical apprentice with an employer who recognized his leadership qualities. With only three weeks remaining in his final set of classes, he would soon write his exam and be a fully ticketed electrician by the end of November.

Then the teaching faculty at Ontario’s colleges went on strike, including Alex’s instructors.  The strike lasted seven weeks before back-to-work legislation forced the them to return. “He had already missed eight weeks of work with me by attending classes, which meant I was one man down,” Hanna Taylor told Canadian Contractor. Taylor is the owner and operator of Hotwire Electric, an award-winning Toronto-based electrical contractor.  “I had scheduled my year on the basis he was going to school and then coming back to work on November 25. My work schedule was booked until January, and Alex is a lead guy.” 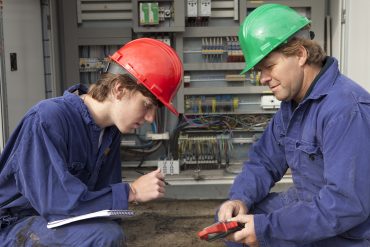 An influx of young apprentices into Canada’s skilled workforce is vital to the future of the residential industry. However, the recent strike by Ontario colleges derailed many students’ plans.

The media ignored the plight of apprentices
Alex is one of dozens of apprentices registered at Ontario colleges who have had their finances and careers impacted by the teachers’ strike. Yet they are the forgotten ones, the Leftovers. During the prolonged strike, media coverage featured teachers whining about their personal hardships. Barely mentioned was the impact their strike action had on students. It took the Liberal government more than six weeks to propose back to work legislation, which was then delayed a few additional days by the NDP opposition, the left-leaning party ironically claiming to represent the interest of workers and trades.

The effect on apprentices went unnoticed, and so was Taylor’s. Her company was forced to go into emergency re-scheduling mode in order to keep work flowing and clients happy. “No one talked to me, the employer who was impacted. Not the school, not the Ministry. Alex has been with me for four years. I’m the one who authorizes him to go to school, I’m the one who booked hours for him, but I mean nothing.”

Hotwire Electric was not likely alone; Any Ontario apprenticeship program requiring blocks of classes in combination with employment in the trade would have been impacted, she believes.

The OCOT stood in the way of a challenge exam for Alex
Taylor went to bat for Alex, however, suggesting he write a challenge exam. She would give him the recommendation letter. However, the Ontario College of Trades (OCOT) wouldn’t allow it. “They said he was ineligible,” Taylor said. “They told him he would first have to withdraw entirely from his apprenticeship program before he could submit his papers to challenge the exam.” In other words, Alex would have to gamble that his challenge would be accepted or he would lose all his previous weeks at school and be forced to start over again.

Alex was in a difficult spot. “During the strike, I couldn’t commit to work for the entire seven weeks of the strike in case they came off strike,” he told Canadian Contractor. “It was hard to work me into a schedule that was already booked. With the strike over, now I can’t work because I have to go and do the last three weeks of school.”

This now means Alex won’t have his license until late January. That’s because even after going back to class, the Christmas holiday break will delay the submission of his marks until the New Year. “Instead of getting my marks two weeks ago [late November], being able to write my exam last week, and having my license this week, December 8, I now have to wait until perhaps late January before I can write.” That’s two extra months, without work and without pay.

No flexibility in workload, no strike relief for apprentices
The other issue confronting Alex and his apprenticeship classmates is the program’s workload. Fulltime academic students had curriculum removed for their programs so they could complete their semesters by December 22. Apprentices were offered no such flexibility.

“What we learned last year is hard to remember this year; a lot of it is math,” explains Alex. “But we were in the groove when they went on strike. That week, I was supposed to have three exams. Now they’ve been shifted to this week. At the same time, we’re learning new stuff, so we’re in fact studying for eight exams all at the same time and have to write them all within a week of each other. We have the same amount of material, the same number of exams, but now we also have to re-teach ourselves what we learned in the weeks before the strike, while learning new stuff for the remaining weeks.” Alex tried to organize a petition asking the college for leniency, but it went nowhere. To make matters worse, apprentices were deemed ineligible for the paltry $500 strike relief fund offered for full-time students to help them manage their finances.

Alex will tough it out with the support of his employer Hanna Taylor. Other student apprentices may not be so lucky. “A lot of students didn’t come back,” Alex says. “Maybe only 25 out of 30 students have returned.”  Maybe it was the financial hit. No matter; should they return, they’ll have to ante up the tuition again and do the whole last ten weeks over.

“I’m alright, Jack. Too bad about you!”
Had the government not eventually ordered the faculty back, they might have stayed out on strike longer. The union was stubborn. In a vote prior to being legislated back to work, 87 per cent rejected the last offer made to them.

It adds up to shabby treatment of young men and women who have answered the call for trained, skilled workers in Canada’s construction industry.

Did you miss Part One of this series?
An industry leader speaks out about the shortcomings of Ontario’s electrical apprenticeship programs

Coming up Thursday….
Meet Richard ‘Sparky’ Hazel. His tale of fraud & deception will scare you!

Got feedback? Make your opinion count by using the comment section below,
or by sending John an email:
JBleasby@canadiancontractor.ca