Living on the edge, Part 1

CC gets up close and personal with Master Edge Homes, Markham, Ontario 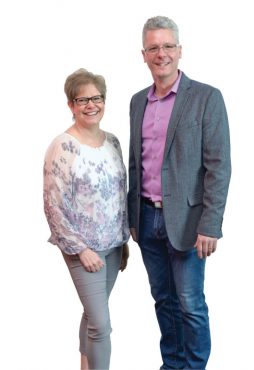 Dwayne and Anne Butler have learned the fine art of balance with Master Edge Homes.

Canadian Contractor sat down with Dwayne and Anne Butler, co-owners of Master Edge Homes, Markham, Ontario, to talk about, among other things, how they started the business, the day-to-day issues of operating it efficiently, and the balancing act between passion and profits. Here is the first of this two-part series.

CC: Dwayne, can you tell us about how you arrived in construction and ultimately owning Master Edge Homes?

DB: Okay. Well, it’s a long history because I am 50 years old, and I have been involved in the industry all of my life. From a father who was a builder/renovator to working summers for construction companies. I studied it in high school, and in college. I graduated from Fanshawe College and became a construction site supervisor, assistant for a builder. And two and a half years later, I decided to go back to school and did my apprenticeship, became a Red Seal carpenter. And then I moved to Toronto, moved around a bit in the Toronto area working for two companies; for one I was doing strictly framing and for the second company I was doing project management for 10 years for a production builder. And 14 years ago, I decided to jump into my own mess [laughter]. The original concept of me moving off job sites and not building 100 houses at a time was just to be by myself and do odd projects for people. It wasn’t about growing a business or creating Master Edge Homes as it is today. It was just to keep me busy. Really, that’s what it was.

CC: You were employing yourself so you could have a job?

DB: Yeah. And then it turned into more and more people recognizing that I was on my own, and the jobs became a little bit bigger. And I hired an apprentice, and then it became two employees and then more jobs. And then we hit one year, we had $700,000 in revenue. It’s like, “Oh my gosh [laughter]! How did that happen?” And then it became a point where here we are today and it’s Master Edge Homes.

CC: So when do you come into the picture and become part of the story, Anne?

AB: We had one daughter. I was pregnant with our second child and his sales pitch to me was that he wanted to improve the industry and give clients better product. So I helped him with bookkeeping. When I went back to work after my maternity leave I continued to do the books on a part-time basis. Seven years ago I quit my full time job and now work full time with Master Edge Homes.

CC: When he first started, was it scary for you? I mean you were pregnant at the time, this sounded like a leap of faith. It sounded like a very altruistic motive as well. So you’re stepping into something that didn’t necessarily have its roots in practicality.

AB: No it wasn’t scary. He really struggled with the lack of quality and was never proud of the end product when he was in production. When you see someone kind of struggle with different aspects of their careers, and they have the ability to make a difference and improve their craft, how can you not support that? At the time there was a lot of untrustworthy renovators in the news and he wanted to be one of the good guys. He really did want to make the renovation industry a better place.

CC: What did you see in the renovation space that you thought you could improve?

DB: There were many reasons why I decided to do what I did. But that story of me wanting to make the industry better is true. In doing so, what did I want to make better was that there was no passion or professionalism in our industry. Subcontractors have a lot of tradespeople that have no passion for their job, whether it be electrician or framer or roofer, nobody cared. And the product that was being delivered was just not to my standards. So my battle on the site all the time was to push the trades to do a much better job to meet my standard. And really, when you talk about a standard, you’re talking about something that is a character issue, not necessarily a technical issue. They probably could have done a better job, technically.

CC: It’s a matter of the passion, because you’ve used the word passion. It’s a matter of not applying the kind of passion that makes you do a better job or the best job. So is that a fair characterization of the thing that you saw that was missing?

DB: Yeah. No one cared. That really kind of resonated with me. The passion, and the desire to put forth the best product, but yet it was also the professionalism that was really missing. It was frustrating. Very frustrating. Because I had no control.

CC: What was your reaction to that, Anne?

AB: I was in full support of it and was thankful that he also wanted to spend time with his family. Business hours were always from 8 in the morning until 5 at night, and didn’t go on into the weekend. Evenings were sales calls and stuff like that, and it got to the point where the company grew. It would grow and then it would (scale back), so it’s a little bit of a rollcoaster, actually not even a little bit of a rollercoaster. It is a big rollercoaster ride. Some days it’s great, and then other days, not good at all, and we didn’t even know what the heck happened. We try to rebuild and then we fix the little nooks and crannies and there were points in time where we just thought “you know what, we’re not doing this anymore” but we couldn’t quit.

DB: Well, I would actually put the passion and the professionalism at the top. The business side of it has been a complete learning curve for us all the way through. We don’t come to this as people who know how to run a business or are business-orientated, so we are learning as we go. So that’s been kind of the downside of business ownership, because we’ve got the technical and the professionalism all under control, and that’s visual through our clients, and our trade partners who love working with us. It’s beyond that, the business operations that Anne and I have learned from day one as ground zero up and have lived the turbulence of money, cash flow, no money, no cash flow, and so all of the above. And so… if we could flip sides and… let the passion and the professionalism be as is and then put the business ownership on top of the pedestal, it would be a different company.

DB: I think that we would have more focus if I didn’t start off in construction but started off in business and went into construction, the business would be running as a full-fledged business from day one. The passion and everything else would come afterward.

CC: What have you learned about the nature of people during the process of running a business?

AB: I don’t think that being a business owner has changed my perception of people in general. I genuinely like people. I like hearing their stories. I care for their wellness whether it’s someone on the street that I don’t know from Adam or someone who’s worked with us for 10 years. I care about them, I wouldn’t say equally because obviously, there’s a relationship that we’ve built with some people over others, but I do genuinely care about people. So that question doesn’t really resonate with me as much as it would with someone who doesn’t already have that characteristic instilled in them. I don’t have a lot of interaction with our clients. I’m more kind of behind the scenes. I do more of the administrative functionalities of the business, so I don’t have that relationship with them. Dwayne would have a very different perspective on that because he’s frontline with our clients. He’s frontline with our partners. He’s frontline with our team internally. Well, let me ask you that question. What have you learned about people as a result of being a business owner?

DB: I don’t know whether it’s any different than it would have been when I was a project manager for a company. You see the different challenges that people have, whether it be personal or technical or just doing their job. I don’t see a difference.

You can read Part 2 of our interview here.

No Comments » for Living on the edge, Part 1

1 Pings/Trackbacks for "Living on the edge, Part 1"