Noted Canadian fiction writer Margaret Atwood has attained a level of celebrity status that allows her to speak on any number of subjects she knows little about, and people will listen. She’s a national treasure, after all. Lately, Ms. Atwood and her billionaire neighbors, the Galen Weston Juniors, have had their knickers in a knot over an eight-storey condominium proposed near their Annex neighborhood in central Toronto. It speaks to the national issue of urban housing availability and the paranoia of any form of intensification brought to a leafy established neighborhood. 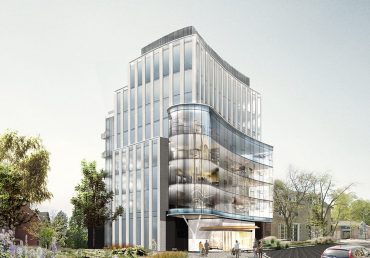 Time for a national dialogue on ‘gentle intensification’
I don’t know how long the term ‘gentle intensification’ has been around. It was first said to me by Bob de Wit of the Greater Vancouver Home Builders Association earlier this year. The term describes efforts to increase density within Canada’s urban centres without spoiling what makes a neighborhood a neighborhood. Triplexes, quads, laneway homes, and semi-detached townhouses that are zone-approved in advance and allowed to be built as infill projects on wide lots are slowly coming into being in Vancouver, Edmonton, Calgary, Toronto, Montreal and many smaller cities too. It makes perfect sense. However it represents change. Existing homeowners in older city neighborhoods can be frightened by change.

What happens instead is that in order to meet density targets, city planners will  approve a multi-storey condo or apartment building in an established neighborhood, rather than allowing gentle intensification to counter infrastructure sprawl into suburban green fields. Why? It’s easier. That’s what’s happened in Toronto. 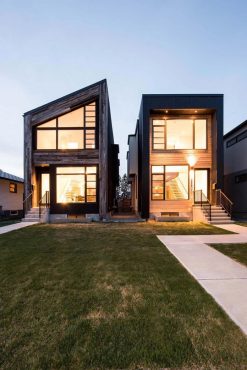 ‘Gentle intensification’ means infill projects like these twin town-homes in Calgary, featured in Canadian Contractor’s ‘Creative Eye’ this past year

The rich and famous cry out to the media
News of celebrity unrest hit the media this past weekend. “Why should a development go right up to their lot lines and kill their beloved trees?” lamented Ms. Atwood to a media that urgently clings to her every word. Graeme Gibson, Ms. Atwood’s husband, labelled it, “close to a brutal and arrogant assault on a community.” It was good of Mr. Gibson to poke his head out from behind Ms. Atwood’s pant suit and chime in; personally, I had no idea Ms. Attwood had a husband. Now we know, and we know a little about how he thinks too.

We were here first!
Toronto brought this upon itself. If City Council would lighten up a bit and allow more forms of gentle intensification, there might not be a need to plop a condo building in Ms. Atwood’s lap. However, what’s really at stake here is more than simple zoning policy; there’s pretense and presumption, a we-were-here-first attitude.

Take as examples contributions to the discussion made by Galen Weston Jr., head of the family grocery business that spans the country. Mr. Weston and his wife, Alexandra were quoted as saying the proposed eight storey condo, “will devalue all of the assets we currently love about living here; it will no longer be the ideal place for our young family to grow up.”

Two things are rather curious. First of all, the condo is not in Weston’s backyard. It’s to be located a few blocks away on Davenport Road, a busy east-west thoroughfare that defines the Annex’s northern boundary. Second, the Westons are ranked the second wealthiest family in Canada. They’re almost royalty. Forbes magazine estimates Mr. Weston’s daddy’s net worth at over US$9 billion. The family owns homes in other parts of Canada, in fact around the world, with private jets and pilots on call to whisk them away on a whim. However, Mr. Weston takes umbrage at the notion of a condo in his Toronto neighborhood. 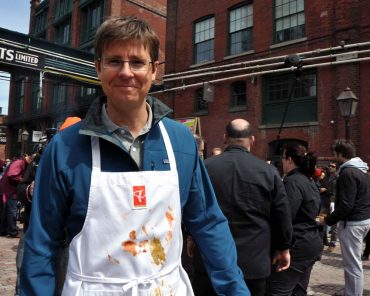 Galen Weston Jr. publicly promotes ‘the common touch’. Privately, maybe not so much.

It’s adorably ironic that the same man who is happy to appear on his TV commercials in an open shirt as an ‘everyman’, shilling his President’s Choice line of groceries, would out himself as such a snob. Mind you, I’m sure Mr. Weston is not suggesting that his young family is particularly precious in any way; he simply feels they are more precious than your family or mine, or someone else with a young family who might want to live near downtown Toronto. The long –term psychological damage to his children resulting from exposure to the condo riff-raff living in close proximity, crowding out his family and devaluing his assets, might be unbearable. The Westons were there first, after all. I’ll try to remember that, next time I go food-shopping.

Why have large urban lots become so common?
Wealthy elites like the Westons and the Atwood/Gibsons have always had their big homes and oversized properties and always will.  However, Casey Edge, CEO of the Victoria Residential Builders Association (VRBA) put a historical context on the matter in conversation with Canadian Contractor recently. “A hundred years ago we were building on smaller 2400 square foot lots, but somewhere along the road we decided we needed larger lots, and that’s where we are today.” Edge went on to observe, “You can have a house that is assessed by the tax authorities at $120,000 sitting on land that is valued at $700,000, yet municipalities refuse to subdivide. The millennials want to move somewhere but the baby boomers are protecting their 13,000 square foot lots with their 1950’s or 60’s home on it. The result will be of significant consequence across the country.”

Edge is right, and Montréal architect Laurent McComber agrees. Canadian Contractor will feature a triple semi-detached development McComber designed in the central part of the City in the upcoming September/October print edition. Taking a 75 foot wide lot in a working class neighborhood and subdividing into three 25 foot lots was, in his words, “unexpectedly easy”. However McComber continued by saying this is not the case generally in Montréal. “It’s becoming a nightmare to get permits, worse and worse every year. It’s a real problem for the entire industry, in my opinion.” He has observed that rezoning difficulties are particularly challenging in wealthier neighborhoods where organized resistance to change by neighbors is more sophisticated, echoing sentiments from developers, builders and architects across the country.

Why is this important to you, our Canadian Contractor readers?
Simply put, our Canadian Contractor readers are more likely to be contracted to build an infill project or laneway house than a high-rise condo. That’s business. As a print magazine, we will continue to champion the gentle intensification concept, in part by featuring more projects of that type like the laneway house in Saskatoon and twin townhomes in Calgary in recent editions, and McComber’s triple development in Montréal later this month.

However, it’s sensible municipal policy too. As residential contractors and builders, you can join the chorus across the country, explaining to officials that our national housing availability crisis needs fixing, and that gentle intensification is a good way to do it.