Part One: Passive House heads the chart of energy-efficiency programs

Canadian Contractor begins an overview of energy-efficiency and sustainable building programs in Canada, outlining which programs suit the variety of consumer demands in today’s eco-conscious marketplace. We look at Passive House, Energy Star, R-2000 a,d BuiltGreen. Each in their own way attempts to trace a path, leading builders towards improved energy-efficiency, or as some say, ‘Net Zero Energy Ready’. That’s the point at which, with the addition of some form of energy generation, a home produces as much energy as it uses.

A brief introduction
Is building a home simply to meet code requirements good enough for most contractors? The answer is likely, “Yes.” As evidence, take a drive through neighborhoods across the country where new home construction is underway. Not much has changed over the past few decades — Wood frame houses with house wrap on the exterior and fibreglass batts between the studs are pretty standard. However, building codes face revision shortly, and with increased attention being paid to energy-efficiency updates over the next few years, there’s a challenge facing the industry. 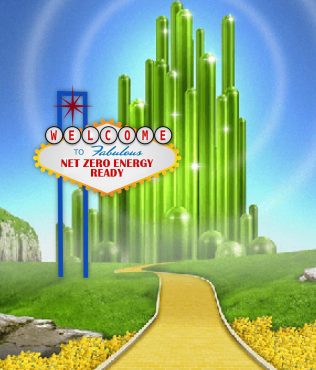 Going beyond code requires a roadmap
Building to current code really means building a house that only meets the most minimum requirements in terms of structure and energy efficiency. Yet going beyond code, particularly in terms of energy performance can be confusing, given the numerous certification programs being presented to builders and consumers alike. How does a forward-thinking contractor determine which is most suitable?

One way to address the issue is to better understand the levels of superior performance offered by each certification program in terms of a percentage improvement over basic code minimum. The ultimate goal should be, of course, to earn an EnerGuide rating for their homes that demonstrates a superior degree of commitment to energy performance levels beyond code.

Passive House: Still the energy-efficiency leader after all these years
Passive Homes stand at the top of the chart of energy efficiency programs. While the concept  traces its roots to Saskatchewan back in the 1970’s, its impact can be felt across the industry today. At its core, the Passive House concept is about building a tight envelope and low ecological footprint so that any mechanical requirements to heat or cool it are minimized. Since that means an improvement of at least 80 per cent beyond current code, getting to that level is demanding and requires commitment.

Ben Polley is one of Canada’s foremost green home builders. Polley and his company, Evolve Builders based on Guelph, ON, are nationally recognized for their industry-leading achievements. Polley makes a clear distinction between what is code compliant and what it takes to go as far as Passive House certification.

“In order to get a standard building permit, one typically performs a heat-load ventilation calculation, normally based on some specific inputs such as the orientation of the structure, the exposure of the structure, and basic descriptors of the building envelope such as the nominal R ratings of the walls and other elements of the envelope,” explains Polley. “Through that, a heating and ventilation designer will be able to come up with a sufficient calculation of the heating and ventilation needs of the house.” 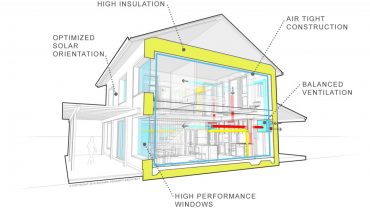 The Passive House is simple in concept, but more challenging in practice. Nevertheless, in Canada it has spawned most of the energy-efficiency programs in use today.

While Polley says that serves the immediate need of getting a permit, and assuming other code minimums are met, he expresses caution. “There are a number of assumptions that may not bear out in actual practice, notably due to data inputs into the heat load and ventilation calculation that are themselves are quick and easy to perform – which is another way of saying that they are fairly limited and basic.”

Polley further explains that these limitations must mask the weakness in that underlying data. “In order to be assured of a successful outcome, the calculations always generate a liberally-sized heating system — No mechanical designer or installer wants a callback because their client’s house is too cold! Overall, the focus is on assurance that we have more than enough heating capacity instead of making certain that we have only just precisely necessary amount.”

Using energy performance modelling to reach a higher level
More sophisticated energy modelling in advance of building can be helpful and necessary if a builder and his customer want to do better than mere minimums. “Ideally energy modeling should get down to the detail of identifying thermal bridges and determinations of the air leakage the final house will have,” says Polley.

Passive house energy modelling in particular gets down to such detail, like evaluating the U-Value of doors and windows and measuring them based on their orientation and exposure, and recognizing the difference between the nominal R-value of individual components and versus the weighted R-Value of the wall structure as a unit for example.  “Effectively, you’re taking an ordinary heating and ventilation calculation and adding a lot more detail and a lot more depth in terms of those types of inputs.  As a result, you get a much more accurate representation of how the house will perform.” 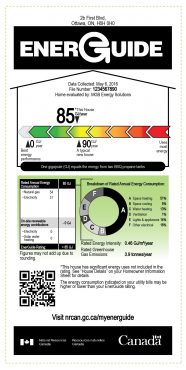 The new EnerGuide label: What forward-thinking home-builders should be aiming for today

Verification and certification: Worth the effort?
Once built, third party verification will confirm that all assumptions in the energy modelling have been met, or if not, where the shortcomings are. This is as true in Passive Homes as any other home seeking of energy-efficiency verification under EnerGuide. As always, the devil is in the details, not the least of which is the maintaining a high level of workmanship in terms of component installation.

As might be expected, Passive Home verification goes beyond the standard. “Not only is there a blower door test to make sure it met the extremes and stringent are tightness requirement,” says Polley, “but there would also be other tests such as visual inspections and infrared inspections to make sure there aren’t thermal bridges that were supposed to be avoided.”

Any energy verification process costs money, and it only follows that the more sophisticated verification process for Passive Homes costs more than standard. For Passive Homes in North America, there are two routes to choose, according to Polley. “One works on a European calculation. The other relies on what is called a North American climate-adjusted standard.  Both are extremely stringent, and the costs are about similar —somewhere in the order of $3,000 to $5,000 plus the cost of the actual verifier.”

Even so, some of Polley’s Passive Home clients balk at the verification costs, going with the more basic blower door test and inspection. For the rest, they rely on their trust that his company has met all the requirements that have been modeled. It could be called a hybrid approach.

Other program options for other scenarios
Due to lot size, orientation restrictions, and proximity to nearby structures, many existing homes or those in production developments may not be able to enjoy the optimal energy-efficient orientations required by Passive House design. And while Passive Homes are not for everyone or for every situation, Polley notes that they are moving beyond the exclusive domain of higher end custom homes. “People may be surprised to learn that we are discovering a resurgence in demand for entry level homes but built to this ultra-efficient standard,” he says. “This is presumably because when you have limited means, you don’t wish to see your money wasted forever on avoidable energy costs. They are willing to spend more up front because they have more years from which to benefit from the energy savings. In fact, approximately a half our custom new builds this year will be entry-level or otherwise modest homes.

In Part Two, we will look at the Federal government’s Energy Star and R2000 programs that attempt to meet the needs of Canada’s mainstream builders, and how the CHBA is attempting bring all parties together under the Net Zero Energy Ready banner.

NOTE: To read previous coverage of Passive House design in Canada, type “Toward Passive House” in our search bar