Nail guns are lethal weapons if not handled properly

Like chainsaws, nail guns have had their Hollywood horror moments too

Remember the famous scene in Pacific Heights when Michael Keaton held a pneumatic nail gun to the face of Melanise Griffith, having gone mad-dog because she was getting in his ‘private space’? 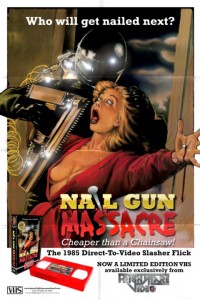 Nail guns are scary tools if not handled properly. Many framing, roofing and carpentry veterans have stories to tell about a nail gun that misfired or was jerked off target. In a recently published interview, Vince Strain, an Occupational Safety Officer with WorksafeBC, estimated that up to 30% of workers have actually experienced a nail gun-related injury.

It’s a gun, so treat it with respect
Nail guns are in fact like real guns….pneumatic versions can fire projectiles several hundred meters…and should be respected in the same manner. Safety is critical. Never point a nail gun at anyone; never hold your finger near the trigger until you are  lined up, braced, and ready to use it. If you’re re-loading, be sure the pressure line or battery is disconnected, just as you would engage the safety on a hand or long gun.

Rapid fire increases injury risk
The biggest safety threat comes when the gun is set on rapid fire as opposed to single fire. That’s when misfire usually occurs. Rapid fire also increases the chances of poor positioning, such as over or near a knot in the wood or a section of metal that causes the nail to shoot backwards or sideways.

However, you can also put yourself at risk with poor body positioning too. Oft-cited examples are working halfway up a ladder where the recoil can throw you off-balance, or in a tight spaces that reduce your ability to take proper aim.

Obviously hands and fingers take the brunt of the injuries. However, serious eye or head injury can also occur, resulting in blindness or brain injury

15 minutes of training can replace 15 weeks off the job 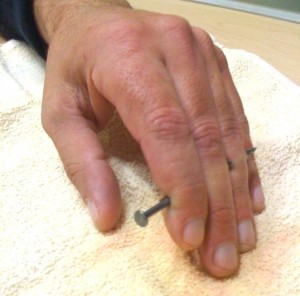 Just one thing you can say: “OUCH!”

It’s critical that site supervisors ensure their workers are trained and have read the manufacturer’s instructions carefully. While nail guns become lighter and more versatile and thus easier to handle, their growing popularity however also means there are more in use than before, often falling into the hands of untrained workers who may be new to the ‘tools of the trades’. And while the guns themselves are designed and built with safety in mind, it’s the untrained and unsuspecting that get hurt.

For more information beyond the instruction manual, consider these sources:

A Toolbox Meeting Guide for safe use of pneumatic nailing equipment

A safety guide for construction contractors