Some people call them ‘plyscrapers’. Cross-laminated timbers (CLT) in tall multi-unit housing and commercial structures are in the spotlight today as a lightweight, safe, renewable, and affordable alternative to traditional steel and concrete. The sky is the limit;  a 40-storey CLT building proposed for Stockholm Sweden would be the tallest in that city and plans for an 80 story residential building in London England have been submitted for approval. More modest buildings are on the drawing boards and in front of planners all over the world, including Canada and the United States.

Related: Do tall wood buildings sound like the Hinenburg? 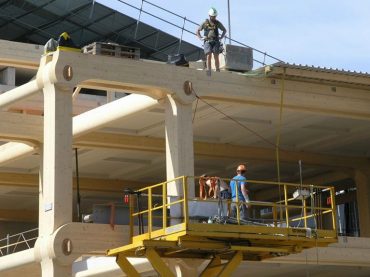 No big wood in this part of Georgia!
However, there are pockets of resistance, notably in the Atlanta suburb of Sandy Springs. In that quiet corner of the southern USA, town officials have created a global buzz storm by asking the State of Georgia to eliminate any wood framing in buildings over three stories tall and/or greater than 100,000 square feet, effective mid-February 2107. Buildings up to five stories would be permitted if they have full sprinkler systems. Their motion to amend state building codes awaits approval.

Where’s the science to back up the ban
What gives? Has Sandy Groves discovered something that has eluded the world’s leading architects, builders, and structural engineering experts? Or have they bowed to uninformed public perceptions that wood is a material that will burst into flames if near a lit match?

What little has been said in public by individual Sandy Springs council members seems to be based more on local biases than any evidenced-based scientific arguments. The town apparently cites concern over safety, quality and longevity, opting instead to allow only traditional non-combustible materials in larger projects.

While advocates of wood construction have been left baffled, organisations that promote the continued use of steel and concrete are heralding Sandy Springs as visionary. In a press release, the Georgia Ready Mixed Concrete Association said, “Our organization advocates for the construction of durable and more resilient building statewide. Sandy Springs is leading the way in Georgia by prioritizing the long-term benefits of non-combustible construction for its citizens and property owners. The City Council has taken a huge step here in making buildings safer.” At the same time, neither the council nor the association have provided much in the way of data to back up their criticisms of wood.

Where’s the beef?
Does ‘durable’ mean long life? Studies indicate that ‘non-combustible’ buildings are demolished sooner than wood structures, bringing into question the lifespan one can reasonably expect from any building today since buildings are likely to be replaced long before that they fail or deteriorate. Durability and longevity would appear to be red herring issues. Some of the oldest buildings still standing in Europe today are wood. 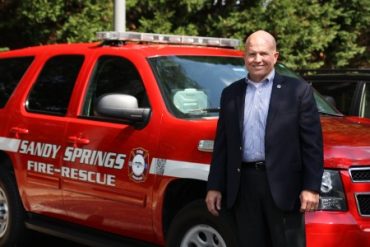 Are today’s fires different than before? Sandy Springs Fire Rescue Chief Keith Saunders seems to think so. In local interviews, Saunders suggested that fires burn faster today than in the old days due to the glues and metal connectors that bind layers and structural components in wooden buildings, thereby posing increased risks of collapse for firefighters on the scene. In fact, studies show that it is the material choices and construction of today’s furniture and decorating accessories that are the major fire risk, not the buildings themselves.

Hard data continues to support wood
Proponents of wood will admit that during construction there may be higher on-site fire risks with exposed wood than with steel or concrete, caused usually by welding sparks or worker carelessness, human issues that can be dealt with through improved education and safety training. What hard data does appear to confirm is that in terms of assembly costs, wood is no more expensive and often less than either steel or concrete. And wood is far greener in terms of sustainability; studies suggest that twice as much wood is grown in the USA today than is harvested, making any arguments concerning deforestation appear silly when compared to the carbon footprint resulting from the manufacturing and transportation of either steel or concrete.

Chances are the good people of Sandy Springs Georgia are outliers in a world that is increasingly embracing the notion of tall wood construction. Look for more ‘plyscrapers’ in your city or town in the very near future.