Fort McMurray contractor who lost everything: “Now I know how the homeless feel.”

The fires that swept through large parts of Alberta this spring, forcing the evacuation of 80,000 residents around Fort McMurray, were a disaster on a scale hard to imagine. Thousands lost their homes and businesses; everyone had their lives disrupted in ways that will take years to restore.

Canadian Contractor’s on-line coverage of the challenges facing the local contractor industry received tens of thousands of ‘reads’ and dozens of comments through which we met renovation contractor Mariano Guillen, owner and operator of A.R. Guillen Construction.

Mariano immigrated to Canada from Nicaragua in 2003 and made Fort McMurray his home eight years ago. Nothing brings the magnitude of the fear and loss suffered by Mariano and his young family to a human level better than my conversation with Mariano a few days after his first visit back to Fort McMurray. 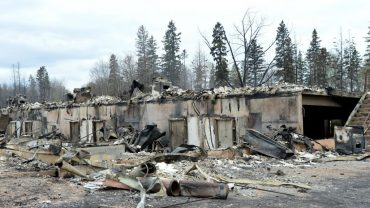 Your neighborhood was last allowed back into Fort McMurray. What did you find when you returned?

We were living in the Abasand area, in a row townhouse. Everything was destroyed completely to the ground. So we went to see it and it’s just a mess. Everything had fencing around it, everything was covered in ashes. There is nothing left, just the concrete pads, that’s all. It was really, really bad to see.

Were you able to retrieve any of your possessions?

No, nothing. Some people were going in, but you had to have special protection because there were chemicals they sprayed over the ashes so the ashes would not fly away, right? But I took pictures, I took videos.

Where have you been staying all these weeks you’ve been kept away?

When we got out of Fort Mac we were just looking for a hotel, but we couldn’t find one. So we ended up going to the Royal Canadian Legion in Fort Saskatchewan for a while. I’ve never seen anything like this in my life; I’ve never been through anything like this. I said to my wife that now I know how the homeless feel; they feel alone, right? They have nothing. You feel like there is no hope.

We’ve been in a hotel now for over a month and it’s been stressful. It’s like being in a cave. Fort McMurray is my home town now. The baby was born there; we’ve been there for eight years. I’m really desperate to go back. It’s been really hard to find a place to stay, to rent, but I found a basement apartment with parking; I couldn’t get a full house, it’s too expensive.

Were you able to save your tools and equipment from the fire?

I saved some but there were so many of them destroyed. I was working on a house also in Abasand and quite a few of my tools were there, and that house was completely burned down to the ground. I was working there and did not know about the progress of the fire. My wife called me and she was crying over the phone and saying ‘Did you see what happened?’ I said ‘What’s wrong?’ ‘Just go outside and see!’ What I see is all the smoke and flame coming behind the buildings. So I grabbed my truck and trailer and went home as fast as I could. When I got there, my wife just grabbed our baby and a few things. There was smoke everywhere, getting into the houses. I was coughing, my wife was coughing, and we were worried for the baby.

Have you been in touch with any of your work crew?

I have, but none of them are back in town yet. I usually had about three or four people either with me all the time or part time. One is now working in B.C., another is working in Edmonton. They left and I don’t know if they will come back or what their plan is.

And of course people want work to start on their homes right away.

There are people who are waiting for me. They know me; I’ve done work for them. What has made me very upset is the day I went back to Fort Mac I saw a bunch of companies I’ve never seen before, right? I did not see many local companies, maybe one or two. These new companies are all over the place. They have huge trailers, big trucks. Other local contractors have been affected by the fire. I’m not the only one.  We have to buy new things before we can work again. We have to get maybe a loan from the bank, or find someone to borrow money from.

There are concerns that outside contractors will take advantage of the residents of Fort McMurray during the re-building. What are your observations?

Everyone one wants to get their place looked after, but it’s kind of disappointing when you see these new companies here. Maybe they don’t do the work properly, right? They are coming just to take the money from the people and they don’t care about problems later. They’re just cutting corners. I already see the comments on Facebook about it. That really makes me feel so bad, because I’m from Fort Mac, right? I’m a local contractor and I do care for the local people. I will see them every day. I’m not just saying this for me; I’m saying it for everyone here.

2 Comments » for Fort McMurray contractor who lost everything: “Now I know how the homeless feel.”