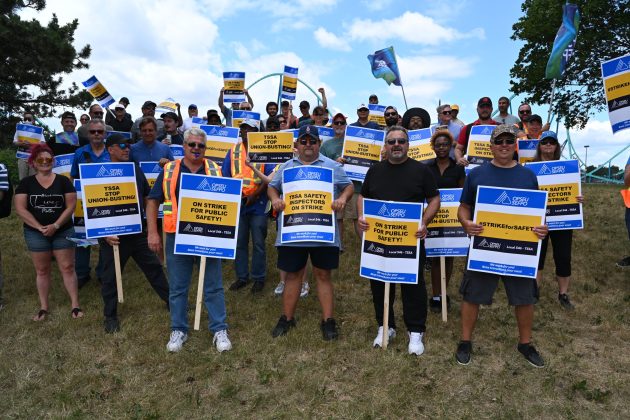 Statement from the inspectors’ union:

Almost 200 safety inspectors with OPSEU/SEFPO Local 546 at the Technical Standards and Safety Authority (TSSA) have voted 89 per cent in favour of giving their bargaining team a strike mandate.

The members work in a number of safety areas and are negotiating a first contract after joining OPSEU/SEFPO last year. A lack of co-operation and movement from the TSSA led the bargaining team to seek a strike mandate from members.

“The employer has demonstrated a consistent unwillingness to bargain and total disrespect for the process,” said OPSEU/SEFPO President JP Hornick. “In the face of unrelenting stonewalling, the union had to ask for a strike mandate – and they got an overwhelming one.”

“When you receive this level of backing from your members, the employer has to sit up and pay attention – and bring a new attitude to the table,” she added. “It’s time to get down to business and negotiate in good faith.”

A strike mandate allows the bargaining team to call a strike, if needed. OPSEU/SEFPO First Vice-President/Treasurer Laurie Nancekivell said the result of the vote is a real show of strength.

“First contract negotiations are often tough, especially with intransigent employers,” said Nancekivell. “With the solidarity that TSSA employees have shown, this employer will have to finally accept the will of members – not only to join a union but to come out with a fair contract.

“I congratulate these members for the solidarity they’ve demonstrated with their team – and their continued willingness to put the future in their hands,” added Nancekivell.

“These conscientious and highly skilled professionals ensure our critical infrastructure continues to be safe for public use,” Hornick said. “These jobs carry a huge amount of responsibility, and those who do them must be compensated appropriately.”

The next scheduled conciliation date is May 26.

OPSEU, the union representing TSSA inspectors, made the decision to commence a strike starting July 21, 2022, before the parties had a chance to reach an agreement.

TSSA has been engaging in good faith negotiations with OPSEU since the fall of 2021 to finalize a first collective agreement for inspectors. Despite these efforts, an agreement could not be ratified before the strike deadline of 12:01 a.m. on Thursday, July 21.

“In order to prevent a strike, the TSSA bargaining team provided OPSEU a full proposal which includes all terms for a first collective agreement and offers inspectors excellent health, dental and pension benefits, and salary increases for a multi-year agreement,” said Laura Desjardins, Vice President, Human Resources. “Given the reasonable and fair contract we have offered and our availability for ongoing discussions, TSSA does not see why inspectors have chosen to go on strike. Our approach is to bargain in good faith, reach a fair agreement and avoid any disruption. Unfortunately, the union stopped negotiating directly with TSSA after the first few meetings and gave indications of their strike intentions. We are concerned with OPSEU’s deliberately false communications that suggest we are not bargaining in good faith.”

While TSSA remains available to meet in the hopes of reaching an agreement, comprehensive plans are in place to continue the delivery of our safety mandate. TSSA will continue to respond to serious safety incidents and inspect any sites classified as high risk. TSSA will also be available to provide services for critical infrastructure, such as hospitals and long-term care homes. Every effort will be made to minimize any disruption to businesses as much as possible.

Owners of devices, sites and businesses regulated under the Technical Standards and Safety Act remain responsible for maintaining and operating devices safely and for immediately reporting incidents. For incident reporting call TSSA at 1-877-682-TSSA (8772) and choose Option 1 to reach the Spills Action Centre (open 24 hours a day, seven days a week).

During a strike, all of our non-inspection services such as engineering, examinations, licencing, etc. will remain available. Expedited and rush engineering reviews will not be available during the strike. You can email TSSA at customerservices@tssa.org or call 1-877-682-TSSA (8772) for assistance.

If you require an inspection for a critical business need, contact our Inspection Scheduling Team Monday to Friday, 8 a.m. to 5 p.m. at:

Please be prepared with the following information before calling to request an inspection:

TSSA sincerely apologizes for the disruption caused by this strike and we thank you for your patience during this time.