Certain paint strippers used by consumers and contractors are to be removed from the shelves in the United States, the result of a directive issued by the U.S. Environmental Protection Agency (EPA). The products in question contain two toxic chemicals, methylene chloride (MC) and n-methypyrollidone (NMP), banned in Europe since 2012. According to the Natural Resource Defense Council (NRDC), “at least four people in the United States have died from methylene chloride poisoning, which can easily overwhelm and kill someone when inhaled, even when wearing a respirator. It is also linked to cancer, making even non-acutely lethal doses harmful over time.”

The NRDC goes on to say, “not all the people who have died from exposure to methylene chloride over the past decade have been do-it-yourself (DIY) consumers—the employees of professional contractors have also been victims of this dangerous product.”

Lowe’s USA quick to respond
Lowe’s in the U.S. was quick to issue a statement that said, in part, “Lowe’s will phase out paint removal products with the chemicals methylene chloride and NMP from its global product selection by the end of the year. This effort is part of the company’s ongoing commitment to bring safer, affordable options to customers. The company also plans to work with the EPA on a consistent regulatory standard across the industry.”

Home Depot was less definitive. The NRDC called Home Depot’s positioning “wishy-washy” in response to statements by a Home Depot spokeswoman, who told them, “For us, we’re continuing to follow what EPA does, and EPA regulations… The primary demand for those products is professional contractors.” 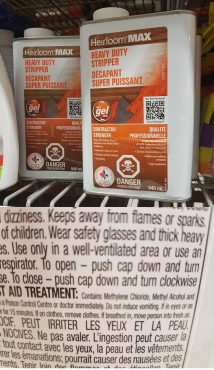 Lowe’s Canadian response echoes parent company. Home Depot is silent
Canadian Contractor contacted the media departments of both Lowes Canada, who also own RONA outlets in across Canada, and Home Depot. Lowes/RONA confirmed immediately that they would take action. “Lowe’s Canada will indeed mirror Lowe’s efforts in the U.S. in phasing out paint removal products with the chemicals methylene chloride and NMP from its global product selection,” a spokeswoman for the company wrote in an email to Canadian Contractor. “Over the next few weeks, the products in inventory will progressively be removed from our shelves and we will update our planograms accordingly. Lowe’s Canada currently has several paint remover alternatives without methylene chloride available today and has plans to bring more options to consumers by year-end.”

Home Depot Canada did not respond to our requests for confirmation or clarification regarding their Canadian outlets. However, Canadian Contractor did visit one Home Depot location in Ontario and found several paint strippers on the shelves. Most did not list their chemical contents. However, one that did listed methylene chloride as an ingredient (see photo).

Canada slow to respond to the dangers
Muddying the waters is the lack of concern expressed by Canadian officials about NMP. ChemicalWatch.com noted in a late February report that, “The Canadian government assessment, published earlier this month, says the general public’s exposure to the substance is not a concern at current levels, and that NMP is not ‘toxic’, as defined by section 64 of the Canadian Environmental Protection Act, 1999 (Cepa). But it makes no reference to a supplemental EPA technical report on consumer exposure and risk estimation for the use of NMP to remove paints and coatings. This contains data and analysis suggesting the risk to consumers can be significant. The omission is striking because the Canadian assessment of consumer risk is based on US EPA data and analysis.”

Nevertheless, contractors and their employees might be well advised to look for alternatives to those products currently using either methylene chloride or NMP. Those alternatives do exist, but checking the label or asking the vendor should help in making the safe selection.