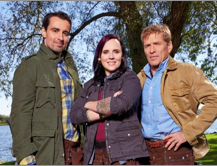 The show will feature five of Canada’s “most inept home renovating couples” competing for a $50,000 cash prize.

Set in the iconic cottage country of Northern Ontario, BLOOD, SWEAT & TOOLS features five duos of hapless handypersons performing all manner of home renovation challenges, from installing toilets and outdoor showers, to building gazebos and repairing roofs. The teams work to impress three experts – Rob Koci of Canadian Contractor magazine, fourth-generation tradesman and carpenter, Helder Brum, and power tool expert Hillary Manion – with successful Do It Yourself (DIY) home repair projects in a bid to be named “Most Improved.” The couples must perform these DIY tasks quickly and to exacting specifications. Then, following eight episodes of hammering it out to stay alive in the competition, the final decision is left up to Canada with viewers determining the winning couple LIVE during the season finale episode. Votes will be cast throughout the finale broadcast via text and social media. Complete voting details will soon be announced.

Blah, blah, blah…  Actually, it sounds like a lot of fun.  And although I haven’t seen any of the show yet, I’ve heard Rob goes totally off his rocker – on several occasions – at the people who are doing their best to follow his insane instructions. Sort of like around here at Canadian Contractor. Sheesh.

Related
Tired of struggling as a reno contractor? Stay in the business but work smarter. Here's how…
GET a free Milwaukee $200 drill/driver for registering TODAY for tomorrow's RENO-SUMMIT seminar near Toronto airport
CMPX plumbing and mechanicals show starts today, Wednesday, in Toronto
Complaints about reno contractors rank 4th behind three other industries in Manitoba
Tags