Radon Gas! Hiding in wait for you in residential home renovations

Over 20,000 Canadians die from lung cancer every year. Yes, smoking is the most common cause. But did you know that Radon gas is the second-leading cause of lung cancer? About 16 per cent of all cases. 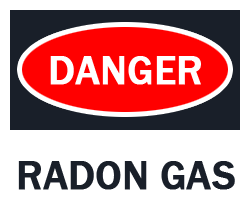 As a renovator or contractor, you’re often exposed to dangerous chemicals that can cause serious harm to your health, but one of the most serious hidden dangers you may not think of is Radon gas.

Radon is quickly diluted in the air outdoors so it’s not much of a concern. However, in confined spaces such as basements or crawl spaces of residential homes, radon can quickly accumulate to harmful levels.

This gas is produced naturally in the break down of uranium in rocks and in the soil. It’s a dense gas, which is odourless, colourless and seeps into buildings through tiny cracks in basements floors and walls. It’s said to be the second leading cause of lung cancer in Canada, after smoking.

In a 2012 study, it was found that Ontario has over 10 per cent of homes reporting high radon levels and these levels vary from region to region within the province. Levels are even higher in Manitoba, New Brunswick, Saskatchewan, and the Yukon. 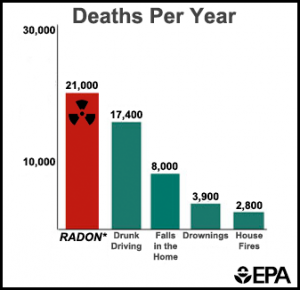 In 2011, an estimated 25,300 Canadians were diagnosed with lung cancer and 20,600 died from it. Lung cancer remains the leading cause of cancer death for both men and women. Based on the radon distribution obtained from this cross-Canada radon survey, the estimation of lung cancers in Canada attributable to indoor radon exposure is 16 per cent.

In order to see a reduction in lives lost, it’s necessary to continue to raise awareness and to encourage testing and action to reduce radon levels in Canadian homes.

Test kits are available to check for this danger and the quickest kit is the 96-hour version through Home Depot stores. The Lung Association also carries longer period test kits, as Health Canada suggests a 3 to 12 month period is needed to obtain the average level in a home.

Health Canada even has an information page you can refer to or print out for your records.

Educate yourself on the dangers of Radon gas and make your every breath a safe one!

By providing education and training, CARAHS reduces your risk of fines, job site closures and prosecution under the Ontario Occupational Health and Safety Act. We are independent of unions and government