"We want to put tools and materials in young people's hands"

EDMONTON – June 5, 2018 – The opening ceremony has all the feel of a Las Vegas spectacular- the light show, the music, the chorus line of young dancers. The Skills Canada National Competition is a showcase of the country’s best young skilled trades students and apprentices representing over 50 trades. They’re in Edmonton because they won at the local, regional and provincial level. It’s been a long and tough competitive road, but now they stand proud in their team uniforms, waving their provincial and territorial flags. Yes, it’s a competition, but it is also a celebration of what these young people can acheive and the promise they offer going forward. 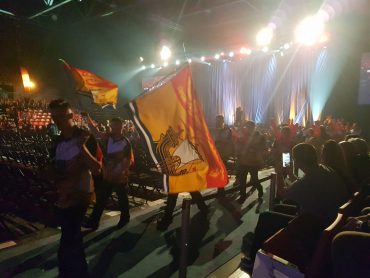 The efforts to recognize the potential of young people entering the trades is growing across the country. However, the Skills Canada National Compeition has been around for nearly 25 years. it has evolved in so many ways says Shaun Thorson, Skills Canada’s CEO. “When it began, it really was a competitor-focussed event. We were really trying to reinforce some of the interest young people have in the trades. What has happened over the evolution of the competition is that we are looking at the visitor experience. How can we engage more of those students who are in close proximity to the competition itself? That has led to the continued growth of the hands-on aspect of the event. Thorson has been encouraging exhibitors to include vustor participation aspects to their displays as a way to heighten interest. “There are young people who have never experienced a trade before and may not know if it interests them or not. We want to put tools and materials in their hands and give them an experiential moment that might challenge them to investigate the trades as a career option.”

Parents and schools have huge roles to play

Yet there is more to be done to get young people even to that level of trial interest, particularly at the educational level. Schools, school boards, local organizers and industry have to find ways to get the message across, not just to the kids but to their parents, that a career in the skilled trades offers opportunities for creativity, financial security and entrepreneurial ambitions. 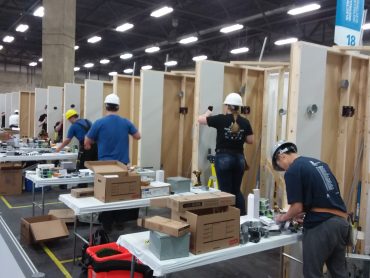 The parental message is becoming increasingly important along with the focus on the education system. Many parents continue to beleive that only a university education and degree will give their children the success in life they seek. Although the stigma concerning careers in the trades is nothing like it was in the past, many of the adult attendees at Skills Canada, both sponsor companies and organizations, talked of how trades training has traditionally taken a back seat, almost literally, to the world of academia. “I remember how the shop class was always located at the very rear of the school,” one said to me. TV celebrity carpenter Paul Lafrance said the same thing me several weeks, that shop class was the preferred destination for the psychos and mass murderers of the future. Or something like that – you know Paul!

Creativity, challenge of trades is accepted by today’s youth

Lafrance’s daughter, Promise, is lucky to have an extremely supportive father. Promise appears to have found her calling in welding. She explained how it was more than mere creativity that attracted her. The challenge of making a perfect weld, as good as her instructor could do, was a driving force. She simply wants to be the best she can be at this highly skilled, male-dominated trade. Lafrance, of course, is a DeWalt product ambassador and popular speaker at events like Skills Canada, given his outgoing personality and ability to connect with young people. But he’s a dad too, and brought Promise with him to Edmonton so she could get even further enthused and inspired. He explains how welding is about total focus. “When the face shield goes down, there is nothing else going on the world,” he says. 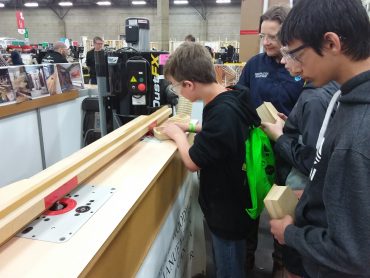 I spoke with a mother and father watching their 8-year old at one of the Try-A-Trade exhibits, this one sponsored by the Alberta Regional Council of Carpenters and Allied Workers. They had come all the way from Newfoundland to support their older boy who was the provincial representative in the Diesel Mechanics competition. Asked what he thought about the trades as a future for his kids, and he showed me his hands. “Our family has always worked with our hands, no question.”

The stigma of the trades versus white collar work is losing its negative stigma among the young, much more quickly than with the elders. Ethan Yochim is going into Grade 9 at his local high school this fall. His father Les owns a successful contracting firm in Edmonton, Belvan Construction, and young Ethan wants to follow his own creative interest in wood working. He’s lucky that his dad has a professionally-equiped wood shop at work – Ethan’s local high school has a few trade course options open to him but no wood working or construction courses at all. Like many of his close pals, Ethan is an excellent student with high marks, and could choose a more academic or high tech direction. For him and his friends, however, it doesn’t make a difference. Tech or trades, both are recognized by his cohorts as legitimate directions to choose.

In addition to the thousands of public visitors, over 6,000 young people will be bussed to the Skills Canada Nationals over its two-day run, most of them high school students. Last week, Ethan and his elementary classmates were bussed into Alberta’s provincial competition. Today he’s here with his dad for a second look. Will it be woodworking, will he take over his dad’s contracting business, will he start his own? A visit to a Skills Canada Competition can play an important role for a young man or woman as they plot their path to the future.