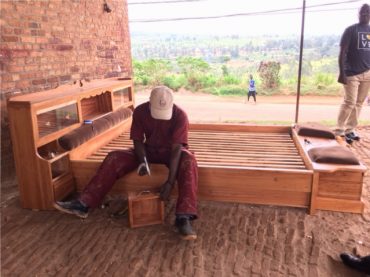 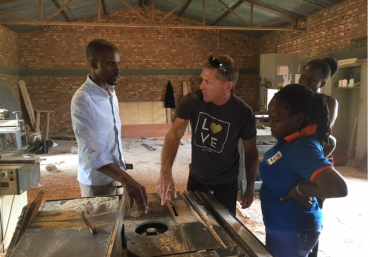 …and the saddest woodworking shop in the world

Today, we drove 140 km upcountry to the eastern province of Gasabo near the Tanzanian border. We took perfect, swept roads (government workers, mostly elderly woman, are found all along the main routes, grass sweepers in hand, bent double, cleaning the smallest crumb and leaf from the gutters) that meandered east through the hills of Kicukiro and Rwamagana, then turned north into more hills till we reached the World Vision regional centre. We stopped long enough to say hello to the director and staff and then continued to the Gakoni Vocational Training Centre (GVTC) about five km further north.

Our meeting with manager of the GVTC Terence Rosagara and wood shop trainer Claude Karekezi opened my eyes to the incredible difficulty providing proper training for the most basic aspects of the trades. The shop itself is actually a good building. There is a barn sized door for bringing materials, tools and finished product in and out, a deck on one side where finish work could be done and sufficient power to run standing power tools. The problem, it turns out, were the standing power tools. Of the five I saw in the shop (a thickness planer, one table saw that doubled as a standing router, an industrial table saw, a band saw, and a lathe), only two worked, sort of. The thickness planer worked but the rollers didn’t. Using it meant pushing and pulling the stock through the (dull) cutters by brute force. The router/table saw worked, but had no fences, which made the router useless and made ripping planks incredibly dangerous. The power hand tools consisted of a sander and a heavy grinder. The entire inventory of hands tools counted a few screwdrivers, a hammer and two rusted saws. No drills, no impact drivers, nothing that we would consider essential drilling tools. The band saw had no band and seemed rusted solid, the other table saw consisted of a motor and the table, nothing else. The turning lathe didn’t have a motor. It defies logic that the students could have built the bed sitting on the deck (see pic.)

It infuriated me that the standing tools had been donated in this condition after the donor received all new replacement tools. I guess they needed to find a place to dump their garbage. 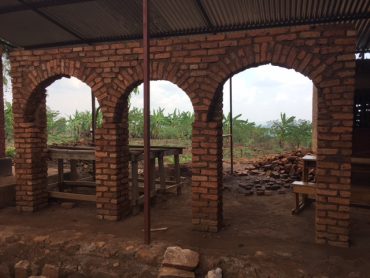 The mason trainer had the good fortune that fewer, cheaper tools were needed for his students and more bricks were available. His problem was mortar. What he used and reused for mortar was a paste that looked a lot like the dusty ground surrounding his work area. There was no cement or lime in the mix he concocted so, once the students had done a few rows of brick for practice, he could take the wall down scrape off the mortar and use it again.

What I saw plenty of was enthusiasm and ingenuity. I saw myself. I saw potential and craft and no real way to leverage it into productive skills. The tools, literally,  just weren’t there. It doesn’t have to be that way.