How to soundproof historic windows while preserving the original unit

Editor’s Note:  Randy Brown is the owner of Soundproof Windows, Inc. in Reno, Nevada. For contact information for this firm, please see the postscript at the bottom of the article.

Canadian contractors can also enquire about how to acquire the product through the Cambridge, ON distributor ARCACOUSTICS (www.arcacoustics.com).

“Windows are one of the most important and integral character-defining features of historic buildings,” states the D.C. Historic Preservation Review Board in its publication Window Repair and Replacement Preservation and Design Guidelines. “They provide a sense of scale, craftsmanship, proportion and architectural styling.”

As such, the primary objective of historic commissions and review boards, not to mention federal and local preservation statutes, is to ensure the existing windows remain intact whenever possible. For this reason, repair is often recommended over replacement with more modern, double-paned windows that can quickly ruin a building’s character and charm.

Repairing aging historic windows, however, has limits. Although glass can be replaced and weather stripping installed, single pane windows do not provide the “air gap” that is the key to the noise reduction and thermal efficiency of the double-pane approach.

Fortunately, an alternative approach preserves the historic and embraces the modern while not altering the original window. Instead, a unique “second window” is installed on the interior that can be opened or closed like the original. Unlike storm windows or glazed panels, these “soundproof” windows maximize both exterior noise reduction and thermal efficiency, and are found in historical districts and sites nationwide. 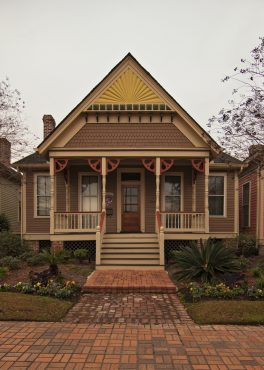 Lawrence Posner sought to preserve the historic 10-foot double hung windows on four of his Victorian cottages, which were certified by the National Park Service. Yet these picturesque cottages, including one he was living in, were located close to the blaring horns of a railroad.

“There’s a double set of train tracks between the cottages and the river, and every few feet the trains would blow their horns,” says Posner. “It was deafening. I had to wear earplugs to sleep. There’s nothing like historic double hung windows for aesthetics, but the windows let the racket right in.”

The beauty of Posner’s cottages and their location, Fort Conde Village, a Mobile, Alabama community of unique Victorian properties meticulously restored to their original design, contrasted sharply with the racket of the railroad. Fort Conde Village, located next to Fort Conde, a pre Revolutionary War fort, is known for its historic details, from the buildings to the gas lamps that light its cobblestone streets.

For Posner, replacing the historic windows of his cottages was not really an option because he did not want to compromise the aesthetics, and getting approval to do so from the National Park Service would be difficult, if not impossible.

Posner turned to Soundproof Windows, Inc, a company with expertise engineering windows for some of the most noise sensitive environments in the world, such as recording studios.

The company has created a second, inner soundproofing window not visible from outside the building that is ideal for historic buildings. The product is custom designed specifically to match – and function – like the original window. It is also designed to be installed quickly.

The inner window essentially reduces noise from entering on three fronts: the type of materials used to make the pane, the ideal air space between original window and insert, and finally improved, long-lasting seals. The combination can reduce external noise by up to 95%.

Air space of 2-4 inches between the existing window and the soundproof window also significantly improves noise reduction because it isolates the window frame from external sound vibrations.

Finally, the company places spring-loaded seals in the second window frame. This puts a constant squeeze on the glass panels, which prevents sound leaks and helps to stop noise from vibrating through the glass.

When choosing such soundproofed windows for a historic renovation project, the most objective measure of sound reduction is the window’s Sound Transmission Class (STC) rating. In this rating system, the higher the number the more noise is stopped. A typical rating for standard windows is 26 to 28, for example. The acoustic soundproof windows, by comparison, earn a 48 to 54 STC rating.

“The soundproof windows saved my life,” says Posner. “They would save anybody’s life if they had to deal with that sort of train racket and noise on a daily and nightly basis.”

Soundproofing the windows of historic buildings can also significantly reduce energy costs. Adding the inner window provides an additional layer of insulation with better insulation values than the best low-e, argon gas filled double paned window. This can reduce heat loss by 77% or more for single paned windows. The added insulation stops unwanted air infiltration around and through window seals, and can reduce the heating-cooling portion of energy bills by 15-30%.

According to Posner, while he purchased the windows primarily for soundproofing, they also have value in terms of lowering heating and cooling costs. “The windows have helped to prevent cold drafts from entering and improve insulation and energy efficiency,” he says. “That’s important to long term comfort as well.”

With an upgrade to the latest soundproof windows, renovators and owners no longer have to settle. Now they can preserve the historic character of properties while achieving modern comfort.

Randy Brown is the owner of Soundproof Windows, Inc.(www.soundproofwindows.com) headquartered in Reno, Nevada. Brown initially developed the first version of a Soundproof Window to solve his own noise problems. His background knowledge about windows came from working with his father, who worked for a high quality storm window company in the 1960’s and 1970’s. With many requests from friends and family, Randy started Soundproof Windows, Inc. in 1998.

Canadian contractors can also enquire about how to acquire the product through the Cambridge, ON distributor ARCACOUSTICS (www.arcacoustics.com).

Related
Are you putting big glass into a cottage? We want to know!
The Road to NZE (Part Three): New window technology delivers big R-value gains
My men tell me the day they repossessed the windows was the most fun they have ever had at work
Window manufacturers compete to win ENERGY STAR's affections