In a cash and royalty sales agreement valued at US$900 million, U.S.-based tool manufacturing and distributing giant Stanley Black & Decker (SB&D) has agreed to purchase the ‘Craftsman’ line of tools, and will both manufacture and market them in new areas including retail, industrial and on-line channels. SBD will pay $525-million at closing, $250-million after three years, and will make annual payments on new Craftsman sales for 15 years. Sears will continue to offer the Craftsman line through their own Sears outlets. Stanley Black & Decker has a number of well-known brand names in its tool and accessory stable including DeWalt, Stanley, Black & Decker, and Porter and Cable, along with many industrial products. SB&D global revenue in 2016 was approximately US$12 billion. 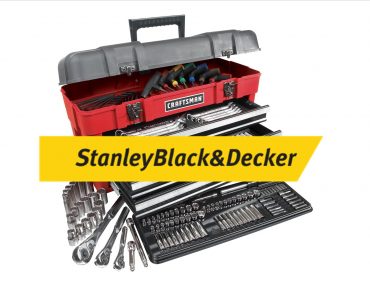 Craftsman sales outside of Sears’ own outlets have languished at less than 10% of the total over the past few years. Unlike SB&D, Sears has never manufactured it’s Craftsman line of tools, instead relying on third party contracted suppliers. Under the agreement, Sears will continue to do that for 15 years royalty-free, but solely for sales through their own outlets.   For all other markets, SB&D will both develop and manufacture Craftsman tools as a continuation of its Made-in-America program.

“Craftsman is a legendary, American brand with tremendous consumer awareness built on a legacy of producing quality products at a great value,” said Stanley Black & Decker President and CEO James M. Loree. “This agreement represents a significant opportunity to grow the market by increasing the availability of Craftsman products to consumers in previously underpenetrated channels.  We intend to invest in the brand and rapidly increase sales through these new channels, including retail, industrial, mobile and online.”

Craftsman was named “America’s Most Trusted Brand” and the brand with “Highest Expectations” in 2007, and also named as the favorite brand of hand tools by readers of Popular Mechanics in their 2009 Reader’s Choice Awards. Craftsman is the official tool brand of NASCAR and the DIY Network. The brand name ‘Craftsman’ has been owned and controlled by Sears since 1927.

The sale of the Craftsman brand is one of many steps U.S.-based Sears is taking to adjust its capital base and improve the company’s liquidity in North America at a time when bricks and mortar retailers are dealing with the continued growth of internet sales. Sears previously announced the closing of 150 outlets in the United States. In Canada, the company recently announced layoffs of approximately 1600 employees and the continued process closing of several more high profile retail locations this year.