“Rewarding and inspiring in so many different ways!” says President Joe Di llio

It takes people, organization, and resources of all kinds to build 75 homes in a week. Habitat for Humanity’s Carter Work Project launched last week in Alberta was a mammoth undertaking involving thousands of volunteers, hundreds of suppliers, and the support of both provincial and municipal governments. These homes in Alberta represent half of the 150 units scheduled to be built by Habitat for Humanity over the course of this summer in every province and territory, in celebration of Canada’s 150th anniversary. The project will provide families with affordable homes they might never have had the chance to own. It’s one of the global organization’s largest projects ever, second only to the rebuilding after Hurricane Katrina in 2005. 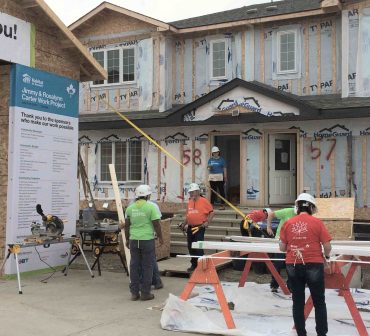 Stanley Black & Decker support for Habitat for Humanity spans decades
It’s an inspiring project, and one that Stanley Black & Decker Canada has embraced on several levels over the past 25 years as a Silver level sponsor of the Carter Work Project.  While the company has a long-standing reputation for corporate citizenship and community support, Joe Di llio, President of Stanley Black & Decker Canada, told Canadian Contractor of the company’s special relationship with Habitat for Humanity. “We’ve been involved with Habitat for Humanity Canada for many years. This relationship is such a rewarding and inspiring one in so many different ways— giving families a home of course, but also as a way to put our products on site and have our employees work on the builds. We’re thrilled to be a part of it.”

Employees get involved and find personal inspiration
When Di llio talks about having his employees working on site, he’s not kidding; they come on board as an organized team of workers, ready to take charge. “This is the fourth consecutive year we’ve had our own Stanley Black & Decker employees do a build on their own as a team,” he explains. “Tools-in-kind is something we’ve done for a couple of decades with Habitat for Humanity, both regionally and nationally,” explained Di llio, adding that the hundreds of hand and power tools used across the country will remain with Habitat for future projects. “However, we’ve taken it a step further by actually sending our own teams. They literally take a site over. We love being able to do that, to see our products at work, and to give back to the community. We like to dedicate that number of people to builds across the country. It’s very rewarding for our own people.” 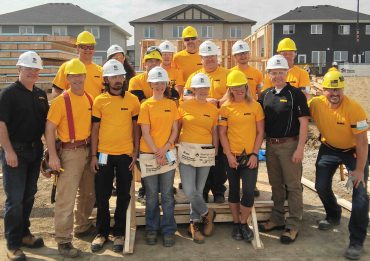 DeWalt sent in their own team of employees to the Habitat site, led by President Joe Di llio (on the right, black shirt)
(photo courtesy of Stanley Black & Decker Canada)

When Di llio was in Edmonton participating alongside his own employees, he not only recognized the value of his team working in a real life setting with the products they represent but also sensed their pride. “Other organizations look at us with envy because we’re usually the first people on the build each day. We work hard, we know what to do, and we’re generally the last ones to pack up. We like to lead the charge and hopefully inspire others.”

President Jimmy Carter swings a hammer!
And when it comes to inspiration, what could be more inspiring than seeing 92 year old Jimmy Carter, the 39th  President of the United States, and Rosalyn, his wife of 71 years, on the site too? This is their 34th Habitat project, reflecting a commitment over the past three decades that has inspired the construction of more than 4,000 homes in 14 countries around the world. 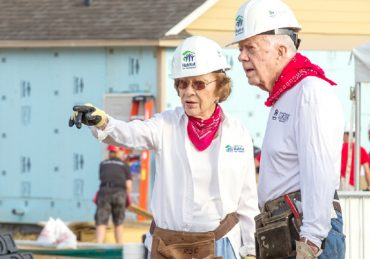 “They’re not just there to be the face of the project; they’re working,” says Di llio. “President Carter was swinging a hammer, building stairs. He takes it incredibly seriously and is incredibly competent with the tools. He’s quite a motivator on the site too, making sure people are working as hard as they can. They set an unbelievable example. What a wonderful inspiration.” In fact, Carter pushed himself so hard while on his next cross-country stop in Winnipeg that he was admitted briefly to hospital due to dehydration. He was later released and went straight back to the work site!

The Edmonton project is to be named Carter Place in honor of the Carters’ dedication. Similar Habitat for Humanity builds are happening throughout Canada over the summer. You can make a financial donation to the Carter Work Project, or donate your time to one in your area. CLICK HERE for more information.