Students take to the tools for school library renovation

The work started at ten in the morning last Wednesday with the construction major students at Patrick Fogarty Catholic Secondary School in Orillia, Ontario picking up their drills and levels and putting their library renovation plans into action. Electronic resources are replacing physical books in many high schools, creating new space begging for re-purposing. And when you have a highly regarded shop programme under the guidance of a teacher as respected as Brett Carron, why not use your own students to create a new student learning space and quiet area in that new-found area? 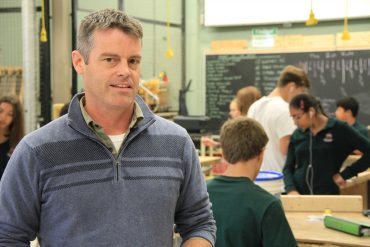 “These are our all-stars,” says Carron, as he looks over his team of Grade 11 and 12 construction majors. “It’s not often that a construction class can be part of a project like this, within the school itself.”

Regional School Board happy to approve this project
Using Patrick Fogarty students on this renovation project needed the blessing of the Simcoe Muskoka Catholic District School Board’s Manager of Plant Services Steve Adams in order to go forward. Adams oversees 53 schools representing about 2.5 million square feet of facilities. “Steve helped us with the Board, and with the City of Orillia,” explains Carron. “He was really on board with us. It was our saving grace.”

Adams himself is enthusiastic about the concept and the opportunity to work with students. “This is the first time we’ve used students like this,” says Adams. “Normally we would have contractors come in and do this type of work but given Brett’s reputation and his high school major students, I agreed to let them take it on and have me work alongside them. I’m thrilled.”

Adams doesn’t discount the idea that success with this project at Patrick Fogarty might open the door for more schools to do the same. “If other schools with construction major students like this come up with projects, we’ll be supportive,” he says. “This project is very straight-forward: steel studding and vinyl board tying into existing structure like columns. Of course, we had the fire department come in to make sure we were in compliance as well as City building officials. They’ll come in after the framing just as if any other contractor was doing the work, and the students will be involved with that too.”

Carron’s program is helping students find their career paths
Matthew is a Grade 11 student in his second year in Carron’s class. The experience has helped him form career plans after graduation. “I can see myself going into construction after high school,” says Matthew. “My family has a construction company and I’ve been working summers on job sites.” Matthew also likes the way Carron teaches. “He teaches you any way you want to learn. He’ll explain things to me that I don’t understand at first, and then shows me. He never centres any one out if they make a mistake.”

Safety is big issue with Carron too. All the students are wearing hard hats, steel-toed boots, eye protection, and gloves to protect them from cuts handling metal studs and channels. “Mister Carron doesn’t want anyone to get hurt, so safety’s a big deal,” says Matthew. In fact, safety has become second nature to the students now. “Every day we walk out to the trailer, we grab our stuff, and we don’t let anyone in unless they have their steel toes and hard hat.” 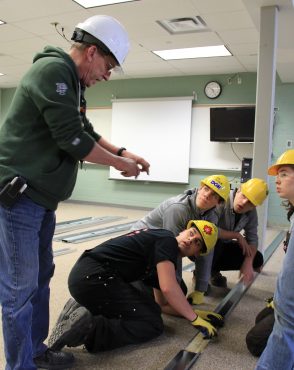 It’s a win-win-win for everyone
School principal Carolyn Healy watches the work commence with particular interest. Not only is her school’s highly regarded construction major program playing a leadership role within the district school board, she’s also excited about the potential for studying, teaching and work-shopping that the newly created space will offer her staff and students. “It’s going to be three areas in one, all thanks to Brett and Steve.”

Healy is also proud that her daughter Bridgette is part of the renovation project team. Bridgette has worked with her father on the family farm, building shelters for the cows for example. She’s now in her third year working as a construction major student under Carron. “I’ve always wanted to have a hands-on job,” she says.  “I’m good at the math and sciences but I’m very interested in construction. I’m going to Lakehead University and Georgian College next year for their electrical engineering degree.”

Being the only girl doesn’t faze Bridgette one bit. “There is no gender issue. There’s no time for that nonsense. We’re all working towards one goal and want to get the job done. It’s great to be able to pitch in, be a part of a project like this, and see improvement in the school community.”

“We’ve always tried to keep the projects in our programme relevant, showcase the students’ talent, and allow them contribute to the community in their own way,” says Carron.  Consistent with that outlook, Carron’s class has started work on two projects slated for delivery later this spring. One is a 12 x 16 heavy timber cabin for a local resort, the other a 10 x10 gazebo for the school.

Canadian Contractor will track those projects over the next weeks, while John will be posting videos on his Instagram page.