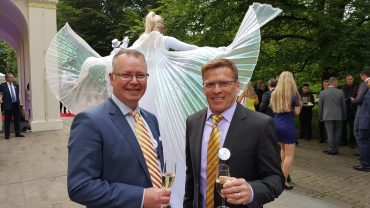 He is the owner of a Tartan Interiors Inc., a drywall subtrade based in Halifax doing work across the country.

As the founder of the awards, Saint Gobain is not exactly a household name in Canada. But it’s a veritable powerhouse internationally as a building materials manufacturer.

One of Saint Gobain’s brands is CertainTeed wallboard. In launching an International Awards program 18 years ago for stunning and architecturally-significant wallboard installations, the conglomerate has certainly found a unique way to celebrate this trade.

Chisholm’s surprise at being half a world away and within a few hours of potentially winning a world-class award is understandable. Like most subtrade contractors, he toils in obscurity. It took his Saint Gobain sales rep to suggest his Halifax Library project for inclusion in the national search for the Canadian representative at the Prague awards. His project was selected the Canadian winner out of dozens of other projects in an awards contest in Vancouver last October.

Did you ever expect to be here?

“I didn’t even know this existed. And I didn’t expect that a small market like Halifax could compete on a world stage like this.”

How did you find out you were in?

“We found out through our local CertainTeed rep. They knew this project was special and it could compete. There were 40 submissions from Canada that entered a competition in Vancouver. We were shortlisted to four and we came out on top.”

Have you been to Prague before?

“We didn’t know anything about Prague. It was not on my bucket list. Really happy to be here.”

Had you ever entered any other competitions like this?

“This is the first completion we have been in. This competition is unique. It’s a great idea to celebrate what a lot of people would consider a mundane part of a business. It raises awareness and makes you proud of what you do.”

“I think we have a good shot. If we don’t win, we are happy to be here. But winning at the national level was very, very important too.”

Will you use this as part of your marketing?

“We have already got a lot of good feedback from our clients.”

How has CertainTeed been helpful to you in your market?

“CertainTeed is new to our market. They bought an existing board company and raised the bar on the level of integration of their product in our industry. And just in general, dealing with architect and government authorities and getting the right materials specified and all that their back up is fantastic. You know, LEED certification efforts require so much effort by the background teams, getting products through.”

Who is your supplier?

“We go through a supplier in Halifax called Coastal Drywall Supply. They are our main supplier. They are part of Tim-BR Mart.”

POSTSCRIPT. After a sumptuous gala awards evening, Chisholm and his wife left with lifetime  memories of their time at the “Drywall Olympics” (our nickname, not Saint Gobain’s!). They didn’t win the gold medal (we will shortly update this article with the names of the winners, and post some photos of the Halifax Library interiors), but they certainly have won the respect of everyone in our industry for promoting Canadian drywall installation excellence on the global stage.