Tesla solar roof tiles will be ready for installation this summer 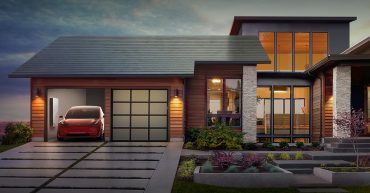 Aesthetics have always been an challenge for roof-top PV arrays. Now Tesla’s breakthrough solar roofing tiles promise to send those negative perceptions into the dustbin of history, albeit at a price. Using see-through glass technology, Tesla‘s tiles look identical to regular roof tiles from the street, yet allow sufficient sunlight to penetrate in order to power a PV system underneath.

Telsa will begin taking orders this month in the USA, according to tweets from company founder Elon Musk, with installations possible by mid-2017. However, it is not clear at this time how Canadians can order the products. Canadian orders and inquiries for installation of the Powerwall backup system alone that will store the electricity generated, make reference to a May 2017 installation date, with prices starting at $7800 plus an additional $2000 for installation.

Less expensive than….?
Tesla founder Elon Musk has previously claimed his solar tiles will cost less to both produce and install than other comparable options. However, according to Bloomberg News, exact pricing won’t be known until deposits for orders start rolling in. However, in saying the new tiles will be less expensive than other comparable options, it needs to be clarified that Tesla is comparing their terra cotta and slate lookalikes to the real thing, which are of course uber-high end materials. In comparison to traditional asphalt shingles, Tesla’s roof material may cost 20 times as much. The payback comes over time in the form of electricity savings. The company offers four styles, including smooth glass and textured glass styles in addition to Tuscan tile and slate.

Tesla is in partnership with 3M and Panasonic
Nevertheless, the product will allow homes to avoid the considerable visual compromise of somewhat unsightly rooftop PV arrays. Tesla’s tiles are made from an opaque, quartz-based tempered glass. The glass is coloured using a new solar film developed specifically for Tesla by 3M, and shaped to resemble solid shingling, and allow light to penetrate to a solar cell beneath. The tiles and the solar panels themselves will be manufactured in partnership with Panasonic at a plant in Buffalo, NY. 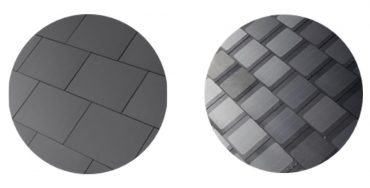 Tesla solar roof tiles look traditional from the the street (left), however the sun gets a different perspective (right)

The Tesla website makes big claims about the self-generation potential for their product.  “Your home can capture this free, abundant energy source through rooftop solar tiles, turning sunlight into electricity for immediate use or storage in a Powerwall battery.” Although one might think at first that coloured tempered glass tile would reduce the efficiency of the panel below, according to Tesla the decrease is a mere two per cent. Future tweaking might even result in further efficiency increases.

Forget “Dumb Roofs”! Get ready for a revolution in residential solar generation
Why solar panels and steel roofs form a long-lasting partnership