The case against Chinese laminate flooring heats up

The television news show 60 Minutes has alleged in an episode re-broadcast this past weekend that thousands of American homeowners with certain Chinese-manufactured laminate flooring in their homes sold by U.S. retail giant Lumber Liquidators may have been exposed to formaldehyde levels higher than legal limits. According to the show, in some cases readings were as high as 13 times the safe and legal limit, putting health at risk and lowering home value. Formaldehyde is a known carcinogen.

Are Canadians at risk?
Lumber Liquidators have 9 outlets in Ontario. The manager of one Southern Ontario location confirmed that all Chinese flooring products were removed from their inventory chain-wide in March. “Everyone has pulled inventory; there isn’t any left in Canada” The same manager also claimed that Home Depot and Lowe’s have done the same, confirming announcements made by those U.S. parent firms regarding the manufacturer in question. “Everything here [Lumber Liquidators] is from Austria or the U.S. at this point. We have some German product on the way in.”

The manager went on to suggest that the testing equipment used by 60 Minutes was faulty, resulting in ‘false positive’ readings, and that the U.S. parent may be counter-suing.

Cheap glues for cheap products
The controversy started when a 60 Minutes crew dispatched to a laminate flooring manufacturing facility in China learned that formaldehyde levels varied according to the quality of the products. “A more expensive process employed an equally more expensive glue formula that employed less formaldehyde. A cheaper process, on the other hand, employed more of the less expensive formaldehyde”. Furthermore, “boxes and shipping containers were mislabeled reflecting compliance with the California standard” according to Lawyers&Settlements.com. 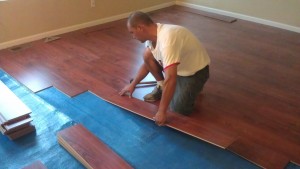 The observations of 60 Minutes might suggest that once again “You get what you pay for.”

Lumber Liquidators responded with free testing kits for consumers to test the air quality in their homes. Most came back, the company claimed, with levels that were within safe limits.

Nevertheless, repercussions of the TV report (originally aired in March) continue to escalate.  In addition to being accused of false advertising and selling products with components that come from endangered habitats, Lumber Liquidator shareholders have filed a securities fraud suit against the company’s board. Three company officers resigned, including the CEO and CFO. The number of consolidated lawsuits against the U.S. company has now expanded to 135.

Have you had any customer call-backs regarding Chinese-made laminate flooring?
If so, please share your experiences with us, either here on-line or in a confidential email to:
jbleasby@canadiancontractor.ca

1 Comment » for The case against Chinese laminate flooring heats up