Wayne Jackson is a throwback to another time. No puffed up titles for him! He’s happy to be what he is – a handyman.

For the past 29 years, Wayne has been building, renovating and repairing just about everything in the homes and gardens of his many loyal customers. Currently he’s based in Amherstburg, Ontario, in the extreme southwestern part of the province.

Our Contributing Editor John Bleasby asks Wayne how he’s managed to turn something so simple into a good living. 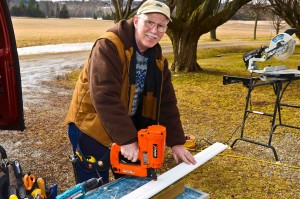 How long have you been handy?

Since I was six. Anything my mother bought I tore apart, just to see what made it tick. I grew up on a farm and so I started working for a lot of the farmers, making things work.

You market yourself as a handyman, pure and simple. No grand titles?

I don’t want to step on anyone’s toes or hurt anyone else’s business. Plus, I want to cover as wide a spectrum as I can with small jobs. I don’t want to limit myself by saying I’m a Contractor or any kind of specialist.

Do you work solely on your own or do you have employees?

Mostly on my own. I do my own plumbing, carpentry, and tiling, but I don’t touch anything electrical. I bring in specialty trades when I need them, but I get the client to hire them directly.

You’ve recently moved to this new area. What are the challenges you’ve faced marketing to a new client base?

I’m finding a lot people here expect me to do the cash thing, which I don’t do. When the GST dropped from 7 per cent to 5 per cent, it wasn’t so bad. Now it’s the HST at 13 per cent, so the cash thing has started again.

What would you say to someone starting up their own one-man operation?

Put flyers everywhere: grocery stores and hardware stores. Get the word out as much as you can. Put your name on your vehicle. I have a red van with 5-inch letters on both sides saying “Wayne Jackson, Handyman” and my phone number. It’s not for my clients; I want neighbours five or six houses down to read my name and number. It’s a business card that I drive around in. Advertise in the local paper. Some people feel if you’re not in the local paper, you’re not in business. My wife had them create a heading for ‘Handyman’. I’m the only one in the section! I also have a website that brings in about 20-25 per cent of my inquiries. That’s been really good.

Are you able to enjoy 12 months of work?

I send out a mailing in the spring to promote outside work. In the fall I do another mailing for inside jobs, like bathrooms, vanities and so on. I ask customers to make lists of what they want done. It’s more cost-effective for them. It’s expensive to hire me to change a light bulb.

What are your Red Flags with prospective customers?

I can tell if it’s going to be a good relationship or if there’s going to be trouble. I run into some who want a ‘deal.’. People with money are often the worst. You give them a quote and they want you to knock 10 per cent off to get the job or even 10 per cent off at the end of the job! And people who say that Mike Holmes says to get three or more references and quotes, stuff like that. My answer is simple: ‘Hire Mike Holmes.’ If a customer is going to start a relationship like that, I’m a bit hesitant to get involved. I never drop my rates. I charge for my experience and the cost of running my business.

Collections are not something many independent operators like to do. How do you manage that part?

I ask for materials payments up front. And I get paid weekly for the work done to date, every Friday. I try to avoid problems right off. For example, I don’t pick colours for paints, but I choose the brand. The guy in the paint shop doesn’t really care; he’s not doing the job.

How has being a handyman worked out for you financially?

Everyone wants more, I guess. But the fact I’ve been in business for 29 years speaks for itself.


Related Stories
What are your thoughts on: “No good contractor needs more than 10 per cent to start a job”
I have no idea where the idea that Mike Holmes trashes good contractors comes from
I'm a one man handyman… and the WSIB premium rate I was quoted was 9.1% on gross… How the hell do they justify this shakedown?
VIDEO: Mike Holmes interview part 8: Educating your customer

3 Comments » for Tips on running a one-man handyman operation