The Toronto ‘crane girl’: Risking others’ lives for Facebook likes?

One false move by the brave firefighter who rescued her, and he could have died 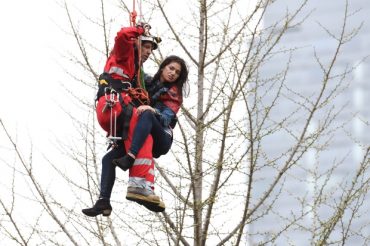 Many of you in this industry would have seen the news reports of a 23-year-old woman being rescued from a downtown Toronto crane, high over a construction site at Church and Wellesley April 26 (more details).

Not only did Marisa Lazo endanger her own life, but she also put the lives of others at risk, too, during the rescue.

One of her friends, speaking to the media after her initial April 27 court appearance (six counts of criminal mischief), said that the woman was a “risk taker.” He spoke admiringly of her, it seems to us. Pathetic!

Lazo’s Facebook page shows her in various high-risk positions on the edge of tall buildings, a bridge, and other precipices. So it’s not the first time she has endangered others’ lives. If she fell from her other adventurous perches, she could have landed on another human being – even a child.

What decent human being puts other people’s lives willingly and knowingly in danger for the thrill of publicity or social-media “likes”?

Still, if she’s eventually found to be mentally ill, we need to be compassionate. If she isn’t, she needs to be most severely dealt with.

The question is, how did she manage to get onto this construction worksite undetected?

Were there barriers erected to stop her entering this work site? What other deterrents were there to stop her from climbing this crane?

Under Ontario’s Occupational Health and Safety Act, the public must be protected at all times while work continues on all construction worksites. Unfortunately this includes this stupid person. Maybe they’ll now be a review of that site’s security.

Constructors are responsible to protect the public, even those homeowners who are determined to climb onto their main residences roofs, while contractors are up there re shingle. What about vehicles parked on roadways and there are no warning pylons out, warning those distracted drivers passing, who might even be texting. Guess we’re responsible for these crazies as well. What do you say?

Related
Toronto judge lets “crane girl” off the hook
Another conviction in the 2009 Toronto swing-stage collapse tragedy
Project manager at Toronto swing stage tragedy sentenced to 3-1/2 years in jail
Help save construction worker lives: Apply to be a Working at Heights trainer

4 Comments » for The Toronto ‘crane girl’: Risking others’ lives for Facebook likes?