Towards the Passive House: A short history of energy-efficient housing in Canada (Part 4 of 5)

This part of our story features a couple of large Passive House structures in Peterborough, Ontario and Vancouver.

This is Part 4 of our 5 part series on Passive Houses.

In this episode, we look at Jason Szacaksi’s very large Passive House in Peterborough, Ontario. Then we travel to Vancouver, to a multi-unit apartment building which lays claim to being the largest Passive House structure in Canada.

Next in our story comes another very solid Passive House project. It’s a 3-story building in Peterborough, Ontario built and owned by Jason Szacaksi, a 17-year veteran of the construction industry. Besides being a builder of elegant structures, Jason is a father of two and an avid traveler who has visited more than 50 countries to view their architectural heritage.

Jason’s Peterborough building was not planned to be a multi-residential Passive House from the beginning. But, as he puts it, he came to feel “that a Passive House makes sense. I’ve always built what resonates deep with me. I can look into the blueprints and ‘visualize’ what needs to be done to translate the blueprints into something special, unique, breathtaking.” 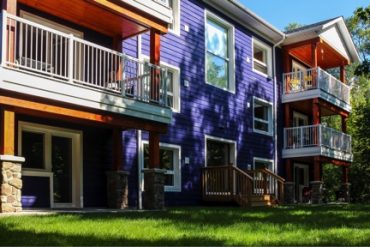 So how was this Peterborough Passive House built?

Jason sums the key of his success in these words: “It’s all about planning and working with the right people.”

The foundation of the house comprised a super-insulated raft slab-on-grade featuring 12” of EPS. It was manufactured by Green Giant Design + Build, owned by Adam Cronk.

Jason excavated 3 feet beneath the surface, mounted the plumbing system, and then poured the base material. The base material had to be compacted and leveled with no variation greater than 2 mm (5/64”) anywhere across the whole surface of the base. “We used some geotechnically sophisticated tools to double-check the levelness of the surface,” Jason recalls. “The slab was then assembled and concrete was poured on a rebar grid of 6″X12″.”

“For that,” he said, “I used prefabricated Larson trusses. This wall system was made, again, by Green Giant Design + Build. 7/16″ thick OSB was used to sheathe the structure. Siga tape was used to seal the seams of the OSBs. Then the Larson trusses were installed. The insulation in these walls was blown cellulose with a density of 4 pounds per cubic foot. The walls are 20 inches thick. The walls were so airtight that the ach50 was less than 0.3,” Jason said. The roof was formed of a truss structure that was insulated with 34″ thick blown cellulose.

All the wiring in the Peterborough passive building was placed in a wire cavity outside the vapor barrier. “No wiring was allowed through the walls,” Jason said. Tremco Acoustical sealant was the main sealant used between the wall plates and the foundation. At least three beads were applied between any two structures with each bead extending at least 3/4″ thick. “If any other gap existed, spray foam was our ally,” Jason said. The exterior cladding was formed of 7/16″ OSB, 1/2″ wood fiberboard, air barrier wrap (Tyvek), a rain screen of 1/2″, then double-strapped wood siding. Screws were the only fastener ever allowed.

The windows were Austrian (Gaulhafer Windows), tripled glazed, and sourced from Hermann’s Building Supplies. Jason explains: “We placed the windows in the middle of the wall. The sill around each window was 8″ thick. The windows open internally, as most European windows. We used Siga tape, again, to seal around each window. We may have used something to the tune of 700 feet of Siga tape per floor.”

Jason wanted to add balconies to his unique passive building. “I used wood beams externally. The deck of each balcony was supported by four beams built on concrete pads. These four beams were separated from the main building in order to avoid any thermal bridging.”

Peterborough’s temperature can go down to -30 degree Celsius easily, so I asked Jason about the ventilation and heating.

“Our heating and ventilation system is simple,” he said. It’s in the form of an HRV system made by Zehnder (Germany) and supplied in Canada by Pinwheel Building Products. Each unit had its HRV with a silencer. Each HRV was worth $6,000. None can skimp on the HRV, otherwise rot and mold abound,” says Jason.

Jason emphasizes that whole building was heated for less than a $1,000 during the whole winter of 2016. The total cost of construction was approximately $1,900,000 – almost 25 per cent more than the price of building a conventional building.

Nevertheless, Jason called his project not just a “beautiful building” but an “economically rewarding” one. “In my next Passive House, I know what to do to build a better Passive House with a tighter budget,” he said.

When asked about the main challenge in building his first Passive House, Jason took a while to think and then concluded: “Make sure to have your whole team of designers and engineers ready to explain to your municipality politely what a Passive House is.”

There are many Canadian companies that cater to Passive House and energy-efficient projects. One of these cutting-edge companies is Quik-Therm, headquartered in Winnipeg. It’s a Canadian firm that provides customized laminated expanded polystyrene (EPS) with different densities, thicknesses, and R-values.

I asked Derek Snitynsky, the Regional Director of Quik-Therm in British Columbia about Quik-Therm’s involvement with Passive Houses.

“The market for Passive and energy-efficient houses is growing,” Derek said. “For instance, we’re currently supplying insulation to the biggest Passive House building in Canada. The name of the building is The Heights, located at Skeena and East Hastings in Vancouver. This is our third Passive House project, and there are at least another five projects in the design phase and ready to be constructed in the next two years.” 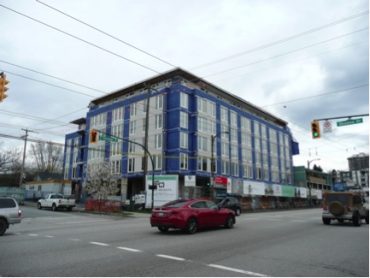 The Heights apartment complex in Vancouver lays claim to be the largest Passive House building in Canada.

Derek said that Quik-Therm is aware that, despite the general engineering principles, each project is unique. “Choosing the right insulation is one of the main targets to lower energy demands, and achieve the Passive House status. We roll up our sleeves for each project and provide a radically innovative solution,” says Derek.

“Thick walls – as commonly advanced – are not the hallmark of Passive Houses,” Derek says. “For instance, one of our future Passive House projects has a limited wall thickness allowance with the neighbouring building. We did come up with a certain wall design that not only met the thickness requirements, but also totally eliminated thermal bridging.”

My discussion with Derek touched on the ambitious goal of Vancouver to be a Net Zero Energy city by 2030. Derek believes that this is possible given that designers, engineers, builders, and tradespeople are willing to learn and find new solutions for their insulation challenges. “Good insulation is almost always associated with good savings in the long run,” he said.

Derek asserts that Quik-Therm is not resting on its laurels. Rather, they are actively engaged in innovation and responding to market needs. “Our latest innovation,” adds Derek, “is an insulation called Solar Dry. Solar Dry has a built-in drainage plane. So in addition to providing insulation, moisture can be dispersed through the drainage plane and allow the wall to “breathe.” Furthermore, it has grooves at 8” on-centre to easily align rain screen strapping. Architects like the building science behind the product, and tradespeople like that it saves them time and labour.” 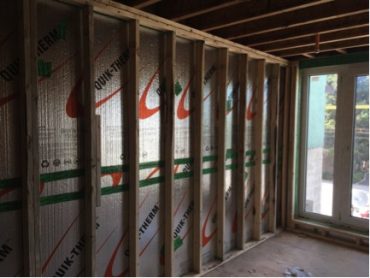 Any Quik-Therm product undergoes the rigorous ASTM C1363 test. This tests the whole wall – from interior drywall to exterior cladding, and shows the real life performance of the product when installed in a wall system.

“Competitors, on the other hand, use the ASTM C518 test,” says Derek. “It tests the performance of a single product without being integrated into the wall system. This bypasses thermal bridging and leads to misconceptions about the performance of the product in real life applications. While a fibreglass batt itself may perform at R-value of 19, when it is placed in a steel frame wall the overall performance is downgraded to an effective R-value of 7,” Derek argues.

Derek says that Quik-Therm has a strong distribution network and dealers across the country. “We work with our clients closely from the design stage to the finishing stage to ensure that they get a proven A-class service,” he says. “We don’t scrimp when it comes to service.”

“We are a member of Passive House Canada. We’re committed to energy efficiency. With our foundation of real life testing, building science, and stamped engineer reports, we can easily and confidently help architects and builders achieve Passive House certification.”

Next week: Why is Canada so far behind Europe in the number of Passive House projects? Comments from Alexander Maurer, Marken Design + Consult.