“This isn’t an ‘Ooops, I forgot.’ It’s a paramount rule in the industry."

Ontario’s Electrical Safety Authority (ESA) makes their position clear: “The laws regarding electrical work exist to keep the public safe from electrical harm. When we discover a licence holder has breached the rules which could potentially put public safety at risk, ESA will utilize its enforcement powers to send a clear message to the public and the industry that such behaviour will not be tolerated.”

Large fines assessed
Tron Electric Inc., of Woodbridge, ON, an IBEW 353 member, felt the full force of the ESA’s mandate this past February. According to an ESA summary sheet supplied to Canadian Contractor on request, “Tron Electric Inc. was hired to do an extensive house renovation, but failed to file a Notification and performed an unauthorized connection.” The incidents occurred in Oakville, Ontario between March 1, 2014 and March 31, 2016. The company pleaded guilty to both charges. 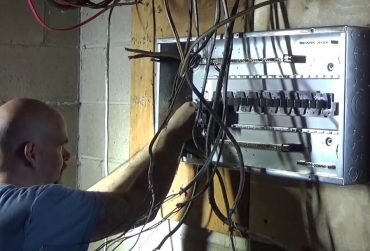 Failure to notify the ESA and Hydro when connecting/disconnecting an electrical service panel is not an “Oops, I forgot!” moment, says an industry insider.

The company was fined a total of $15,000 plus victim’s surcharges. Normand Breton, Registrar and Director, Contractor Licensing and Powerline Safety for the ESA, wrote in an email to Canadian Contractor, “The amount of fine was agreed upon between the ESA prosecutor and the legal counsel for the Defendant.” Breton added that, “the Justice of the Peace agreed with the parties’ joint position on the penalty.”

A serious breech of industry safety protocol
Tron Electric’s website says that the company has “over 45 years of experience.” According to ESA documents provided to Canadian Contractor, Tron is the operating entity for 2024134 Ontario Inc., and is owned by Giuseppe Loreto Cerosuolo. The company says it is a two-time winner of HomeStars awards, most recently in 2019.

The conviction of a union member electrical contractor came as a shock to one industry insider who spoke to Canadian Contractor on condition of anonymity, commenting that the actions of this sort were “life threatening, and that’s putting it mildly.” They further commented that, “This isn’t an ‘Ooops, I forgot.’ It’s a paramount rule in the industry. First, notify the ESA; second, notify Hydro; and third, no one is allowed to pull a meter or panel service without both of those being called for inspection, to ensure no one dies.”

Breton was not able to answer other questions submitted in writing by Canadian Contractor. We asked if there was an invoice paper trail detailing the nature of the contracted work. We also asked how the matter came to the attention of the ESA, whether this type of violation by a union member was unusual, and whether the homeowner(s) were put at risk as a result of the actions taken by Tron. “I am unable to disclose this information,” was his response to each of these questions.

Breton concluded his written response by saying, “If anyone is aware of electrical work being done outside the law, we ask that they report it to ESA immediately – and you can do so confidentially. ESA investigates each and every one of these reports.”