UPDATE: Western drywall import tariffs will remain (but may be reduced)

This updated story has been amended since original publication January 5th.
The Canadian International Trade Tribunal (CITT) has recommended that the federal Finance Ministry reduce tariffs imposed last fall of up to 275% on drywall entering Western Canada. However, tariffs should remain at levels described as ‘variable’.

Since the imposition of drywall tariffs on a preliminary basis last September, the cost of gypsum drywall board has soared in Western Canada, by as much as 80% at the retail level according to Canadian Contractor’s own internal surveys. 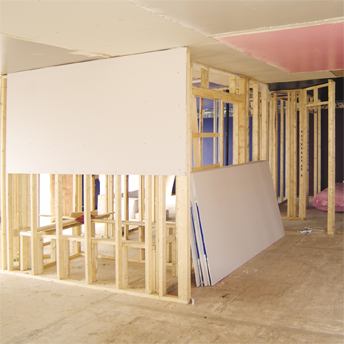 While confirming that U.S.-made gypsum drywall had in fact been ‘dumped’ into Canada at prices that were harmful to Western Canadian manufacturers, the CITT conceded that the resultant high costs of the tariff “in its full amount” had the effect of “substantially reducing competition”, and was contrary to Canada’s economic, trade and commercial interests, was hurting competition, and effected consumers and businesses.

Just one company manufactures gypsum board in Western Canada
In fact, there is only one Western Canadian manufacturer of gypsum drywall, CertainTeed Gypsum Canada, the company that launched the complaint and asked for tariff protection. The company claimed that 200 jobs had been lost due to the dumping of U.S. product into the Western market, but that 30 jobs had been recovered since the tariff was imposed.

Potential refunds for tariffs paid
Although the higher provisional tariffs will remain in place until the Finance Ministry makes a final ruling, the CITT further recommended that the federal government consider refunding some of the tariffs paid since September to reduce the short term injury caused to contractors and consumers, with a particular focus on rebates and exemptions for the re-building of Fort McMurray, where over 1,800 were destroyed by wildfires this past spring.

A cap on tariffs
The CITT furthermore recommended a 43% tariff cap on imported U.S. drywall. “Final duties for any cooperating exporters on any export transaction involving subject gypsum board to Canada should not exceed 43 percent of the export price at any time on and after the earlier of July 5, 2017, or the date the subject imports reach a maximum volume of 229 million square feet”, the CITT report recommends.

The CITT also recommends “all of the final duties imposed on cooperating exporters be remitted to them through a simplified process ….. allocated on the basis of historical export shares; this temporary elimination of the duties would give time for the downstream market participants (especially drywall installers) to perform existing fixed-price contracts and, going forward, to give them an opportunity to reflect the duties in new contracts.”

Some observers suggests that the issue could become political, given the mention of NAFTA re-negotiations bythe incoming U.S. presidential administration, and the recent comments from the U.S. Trade Commission that Canadian softwood lumber was harming the U.S. softwood industry. 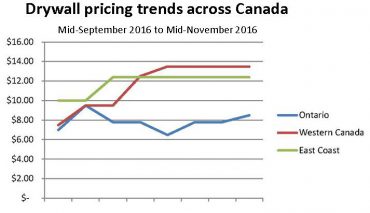 Home building industry hopeful
Reaction from the Canadian Home Builders Association to the CITT recommendations is one of cautious optimism. “In order to ensure that the recommendations of the Tribunal do in fact avoid the harm they are now seeking to mitigate, the details of implementation, which are expected to be released in the Statement of Reasons report due by January 19, 2017, and actual subsequent implementation by the government, will be key,” said CHBA CEO Kevin Lee in a release.

At the same time, both the CHBA and the Western Canada Alliance of Wall and Ceiling Contractors (WCWCC) had praise for the efforts of Finance Minister Bill Morneau to ensure all interested parties were heard through the Tribunal process. Speaking for the WCWCC, Neal Pollock said in a release, “If it were not for the creative and thoughtful efforts by the Minister and his staff, we would  not have had the opportunity to be heard by the Tribunal on the downstream harm caused to our industry by the imposition of the  stark and harmful price increases which took effect overnight following the imposition of preliminary duties,” he said. “The Minister immediately recognized the need to understand the downstream impact of the duties on users including small and medium sized contractors in Western Canada.  He acted quickly to set up a process before the Canadian International Trade Tribunal whereby their views could be heard. No previous Ministers of Finance have supported small and medium-sized businesses as much as the Minister has done in this case.”

Variable tariffs would control drywall prices
Canadian Contractor notes that prices in Western Canada have indeed soared since September, in fact increased to some degree all across the country, likely due to supply disruption issues. Many wonder if there is no turning back those increases, at least in the near term. Some relief may be in store, however, as tariffs going forward could vary if the CITT recommendations are accepted, possibly based on a floor price established in December when the tariff fully impacted the marketplace at all levels. Such a ‘variable’ tariff instead a high fixed tariff would appear to be an effort to control drywall prices at levels that would allow CertainTeed to continue manufacturing in Western Canada at sustainable (ie. profitable) levels, and hopefully add even more jobs to their payrolls.

1 Comment » for UPDATE: Western drywall import tariffs will remain (but may be reduced)